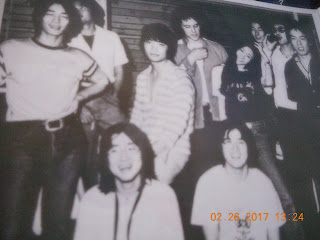 This is the 70th article for singer-songwriter Taeko Ohnuki（大貫妙子）and I've only taken care of her music in the 1970s and 1980s for the most part, so there is still much for me to do in taking care of the creations that she's provided in the last few decades.

"Wander Lust" is a track on Ohnuki's solo debut album "Grey Skies" from September 1976, and as the title says, it's about a young woman who has broken free from the past and has decided to excitedly go to places unknown and try things anew. In a way, I think "Wander Lust" may have been the track of the album because of those lyrics. According to an interview she gave in an October 1983 issue of the journal "Music Steady"（ミュージック・ステディ）, the song was the embodiment of her frustration of not being able to perform the type of music that she had desired while being in the band Sugar Babe.

Ohnuki took care of words and music with Ryuichi Sakamoto（坂本龍一）handling the arrangements. The singer mentioned that "Wander Lust" is pretty jazzy, and the piano (which was probably played by Sakamoto) has plenty of opportunities to break loose throughout the song as if it were on some sort of wander lust itself. It's a fun and refreshing piece of New Music (love the intro and her backing vocals), and I'm obviously speculating greatly here, but I could imagine Ohnuki grinning from ear to ear as this was being recorded (and from that photo above from her second album "Sunshower", she has a great smile!). Freedom never felt so good. "Wander Lust" was also the B-side to her 1977 single "Ashita kara, Drama"（明日から、ドラマ...Drama from Tomorrow）.
Posted by J-Canuck at 8:39 PM