I'm probably a little slow in finding this out: when Haruo Minami (三波春夫) appears alongside the San'nin no Kai, they are then collectively known as the Yonin Shu (四人衆)... now that makes it easier for me to refer to all of them at one go!

Anyway, there's this show on NHK that airs from time to time on Thursday evenings whenever a Thursday drama has finished its run. It's called "Gokigen Kayosho Gekidan" (ごきげん歌謡笑劇団), or "Happy Theater", as mentioned in the English schedule, and it is hosted by my favourite monomane talent, Korokke (コロッケ). Starting every episode is a period skit performed by the man himself as well as the guest actors/comedians and enka singers of the day, and through one recent skit staring Tetsuya Takeda (武田鉄矢) as a ronin (he's pretty convincing as one), I finally understood some of the terms used in many enka tunes that feature these hardened wandering warriors. Minami's "Yuki no Wataridori" is one such example.

The first term was one that I had some sort of idea as to what it was really referring to, that being "Wataridori", which means migratory bird. Many, many songs about ronin have this term, but I wasn't able to fully understand how birds are related to the fellas. My guess was that the "Wataridori" referred to the ronin themselves as they too never stay in one place for long. But Korokke's skit helped to cement that idea. It really did refer to the ronin. The next term learnt, I've only heard in "Yuki no Wataridori", and that's "Koi na" (鯉名). This one really puzzled me as it translates to "Carp name". It is mentioned in one of the last few lines of "Yuki no Wataridori" where the scene seems to be that of a showdown between the ronin and some badies, and it had me wondering why Minami said that the name of his carp is Ginpei before the fight. Did he really like his koi that much? Thankfully, the skit came to the rescue yet again. When introducing Takeda's character, rather than the usual "Namae" before the name, it had "Koi na". So, if I'm not mistaken, "Koi na" is just the ronin term for name. Man, the relief felt at that moment when getting its meaning was amazing! That's about all the terms I got so far, though there are still a few I have yet to understand.

Alright, now that I got the concepts for some of the words used in this type of enka, I think "Yuki no Wataridori" should be about the ronin travelling around in winter, when the snow falls, covering the land and the top of his straw hat in a thin sheet of sparkly white. Just like the songs like it, "Yuki no Wataridori" has a chirpy score to it, and it really fits Minami's bright and cheery persona.


This song was written by Minoru Shimizu (清水みのる) and composed by Akira Mutsu (陸奥明). Released in 1957, this was one of Minami's first few singles and I imagine that it did well in terms of sales as it allowed the enka veteran to sing this on the 1st of his 29 appearances on the Kohaku in 1958. He sang it two more times on this competition in 1979 and 1984. Many singers have done covers of this hit, and one of them happens to another big name in the enka world, Hiroshi Itsuki (五木ひろし). He did a pretty good job. And then again, Itsuki usually does a good job with the classics. 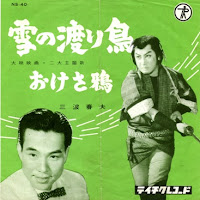 Ah yes, the nickname Mom had decided to give Minami... Well, fans of Minami please don't take any offence and I apologize if any taken, she didn't really like him at first (she's somewhat alright with him now... not his singing though) and thought of him as rather feminine due to his flowery and pastel coloured kimonos and graceful movements, so she called him "Sisi", as in "Sissy". I objected at first, but gave up eventually.
Posted by Noelle Tham at 9:36 AM