I remember Junko Mihara（三原順子）, primarily from her lone appearance on the 1982 Kohaku Utagassen. Her voice (on the show at least) reminded me of Momoe Yamaguchi's（山口百恵） pipes....low and slightly raspy, but her appearance had that tough no-nonsense biker chick look about her. She was the top batter for the show...not exactly the easiest place to start from, especially when it was the Kohaku. I distinctly remember that she held up OK for most of the song but started losing it in the last few bars.....in the previous year, Hitomi Ishikawa（石川ひとみ）was 3rd in the lineup, and she completely broke down halfway through.

Mihara sang "Honki de Love Me Good"(Truly Love Me Good) which was her 10th of 21 singles that she released mostly during the first half of the 80s. She would probably identify herself as an actress who did some singing on the side....I found out from J-Wiki that her TV debut was in 1978 in a guest role on the Japanese version of "Spiderman"! Released in October 1982, "Honki de Love Me Good"went as high as No. 11 on Oricon. The song was written and composed by TAKU as this rambunctious and speedy 50s rock number....a popular template at the time; in the recorded version, Mihara sings in a higher register.

Mihara has now completely divorced herself from show business but she still has the potential to get her name in lights as an LDP politician in the House of Councillors of the Japanese Diet. I was fortunate enough to get a picture of her campaign van a few years ago in Shibuya. 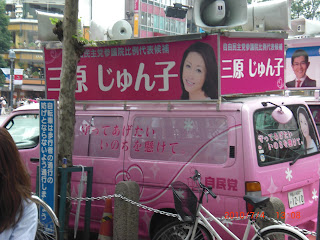