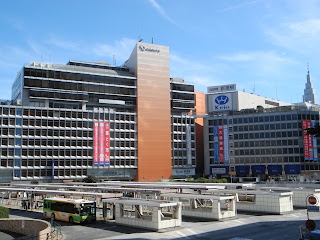 We've got a bit of weather breezing in right now and things are getting a little humid in my room, so I've got my 40-year-old fan whipping the air about. Something nice and mellow would be just the thing.


I think this cover for Ryusenkei's（流線形）2006 album, "Tokyo Sniper" will be the representative one when it comes to this band of 21st-century brand City Pop/J-AOR. I don't think the jogger is necessarily going to be assassinating anyone...certainly not in that getup, anyways. However, with that expression on her face and the slightly belligerent pose, I believe she's ready to give an exasperated chewing out to her slower-than-molasses boyfriend or husband.

One of the tracks on the album is "Rainbow City Line". At first, since I hadn't focused so much on the title, I had initially thought that this was a direct cover of Minako Yoshida's（吉田美奈子）"Rainbow Sea Line", assuming that the Ryusenkei number actually had the same title. When I heard the melody and read the lyrics for each tune and realized that they were different, I kinda Gibbs-slapped myself up the head. I ought to practice reading the fine print a little more carefully.

Still, I read one comment on YouTube which stated that "Rainbow City Line" was a nice tip of respect to Yoshida, who can be considered to be one of the pioneers for New Music, City Pop, J-AOR and J-R&B. However, I think that Ryusenkei and vocalist Hitomitoi (一十三十一...for whatever reason, she decided to go with the pseudonym Nika Eguchi/ 江口ニカ for this song) were paying tribute to 1970s City Pop in general with the arrangement. Heck, even the lyrics pretty much paint the picture of a typical image on a City Pop album cover:

When I get off the highway,
I feel the sea breeze.
Through the sunset
Reflected on the cafe terrace window,
I still go after that vision in the distance.
The love song gets gradually better
And the city line flows out

Man, could I use a Corona right now! (Uh, no, that's not part of the lyrics. Just my feeling after hearing those dreamy words.)

It must have been quite the feeling listening to City Pop like this in the 1970s while sitting in that cafe or bar in one of the rising hotels in Tokyo. I will still bet on the Tokyo Prince Hotel for that view (personal bias definitely), although hotels since the old Prince have sprouted to much higher levels.
Posted by J-Canuck at 9:10 PM