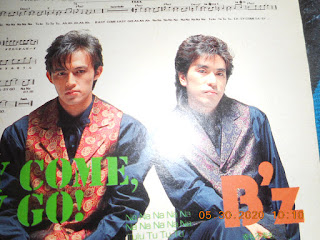 Welcome to the last full week in August 2020. A few days ago, I put up "Oricon Top 5 Most Commercially Successful Composers" which included one-half of B'z, Takahiro "Tak" Matsumoto（松本孝弘）. It seem as if virtually all of Matsumoto's compositions have been centered on his duo's songs, and that also includes his (and B'z's) most successful tune, "Ai no Mama ni Wagamama ni Boku wa Kimi dake o Kizutsukenai" (Even Though Love is Selfish, I Will Never Hurt You), which may end up being the longest title so far to grace the top of a "Kayo Kyoku Plus" article.

Listening to their 12th single released in March 1993, "Ai no Mama ni Wagamama ni Boku wa Kimi dake o Kizutsukenai" starts off in a rather mellow way and similarly to their later hit "Love Phantom". It's a gentle introduction to what becomes another B'z spectacular with those horns and electric guitar and Koshi Inaba's（稲葉浩志）super voice. I really feel like hitting outside and running about 10 kilometres from playing this, and this is from a guy who eschews exercise whenever he can.


The song is very familiar to me but I had no idea that it also served as the theme song for the 1993 live-action adaptation of "Saiyuki"（西遊記）. I knew about the earlier version from the late 1970s for which its theme song was Godiego's（ゴダイゴ）"Monkey Magic". For both of them, I could say that they are famous products of their time.

Unsurprisingly, "Ai no Mama" hit No. 1 and stayed at the top for 4 weeks, eventually selling more than 2 million copies and going Gold. It would end the year as the No. 2 single and currently holds the No. 21 spot in Oricon's All-Time Singles list. The song's first appearance on an album was on "B'z The Best 'Pleasure'" which came out in May 1998.
Posted by J-Canuck at 3:39 PM