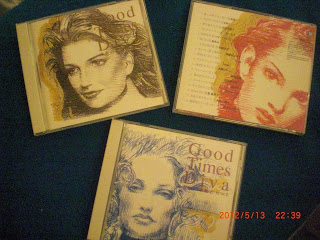 Hard to believe but we are in the last few hours of August 2020. Mind you, for a lot of us, though, there is still plenty of summer to be had for a while longer.


Within my collection of the "Good Times Diva" series, I noticed that there was one singer who stood out from the others with her way of singing. Shizuru "Sizzle" Ohtaka（おおたか静流）is a Tokyo-born musician and singer who graduated from the humanities at Musashino University and made her official debut under that name in the 1990s covering a wide swathe of genres including minyo, world music and jazz. She had also started out in a duo called dido with songwriter and arranger Michiaki Kato（加藤みちあき）in 1989 but then also began that solo aspect of her career.

In January 1992, Ohtaka released a cover of "Kanashikute Yarikirenai" which seems to be one of those kayo that is a particular favourite to be covered according to its J-Wiki article. Along with the original folk version by The Folk Crusaders in 1968, "Kayo Kyoku Plus" also has the whimsical cover by singer-songwriter Kotringo（コトリンゴ）as the theme song for the 2016 anime movie "Kono Sekai no Katasumi ni"（この世界の片隅に...In This Corner of the World）.

Ohtaka's cover is one of the songs that was included in the "Good Times Diva" series, and it has an ethereal and haunting quality that I think approaches something Okinawan, but maybe the singer meant to be more pan-Asian or as one of her desired genres would indicate, global in feeling. As well, her vocal delivery also hints at minyo while some of that keyboard work at the very end sounds a little bluesy. It's as if the core melody by Kazuhiko Kato（加藤和彦）has been given some extra layers here and there from all over the Pacific Rim.


The song was used as the theme for the January 1992 film "Shiko Funjatta"（シコふんじゃった。...Sumo Do, Sumo Don't） which won the Best Movie award at the Japan Academy Awards for that year. Starring Masahiro Motoki（本木雅弘）, it's all about a university student who has to join the sumo club to graduate, and it's been touted for the fact that it is one of the few movies anywhere set in the world of one of the country's ancient sports or martial arts.

I mentioned near the top of the article that Ohtaka "...made her official debut under that name in the 1990s...", and that of course still stands. However, although no large explanation is expanded upon aside from a point made in parentheses in the second sentence of the J-Wiki article for the singer, Ohtaka apparently had began singing professionally as far back as the late 1970s under the name Shizuko Ohtaka（大高静子）. I point this out because she has one song from that period in "Loft Sessions, Vol. 1", an album of City Pop and New Music tunes that I will cover sometime soon.
Posted by J-Canuck at 8:34 PM