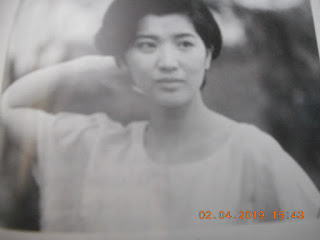 I bookmarked this particular song by aidoru Junko Sakurada（桜田淳子）not only because "Mayuzukiyo" (Crescent Moon Night) is her 38th and final single to date, but the arrangement is also rather intriguing to me.

"Mayuzukiyo" was released in September 1983, and by that point, Sakurada had basically made a full transition into acting as her days at the top of the Oricon charts had long passed by. Her last three singles going back to 1981 including this one didn't even get onto the charts. Furthermore, she didn't even make any TV appearances to perform the song and there were no other filmed examples of her ever singing "Mayuzukiyo".

Still, it's interesting in that the song and the singer together make this recording sound like something that was created by Miyuki Nakajima（中島みゆき）, although it was actually written by Mebae Miyahara（宮原芽映）under the pseudonym Yuu Kayano（茅野遊）and composed by Kei Ogura（小椋佳）with arrangement handled by Keiichi Oku（奥慶一）. There is something very fresh and open-air about "Mayuzukiyo" as its lyrics deal with a woman's own handling of sudden heartbreak while at the same time sounding a bit like a 1950s puppy love ballad. I can even imagine someone like Ruiko Kurahashi（倉橋ルイ子）covering the song as well.

The song was also included on Sakurada's 15th album released in the same month, "Naturally"（ナチュラリー）. It would remain her final album until February 2018 when that 16th album "My Idology"（マイ・アイドロジー）was released in commemoration of her 45 years since her debut. "My Idology" contains a new song and covers of four of her own hits among the 8-song album.
Posted by J-Canuck at 7:39 PM