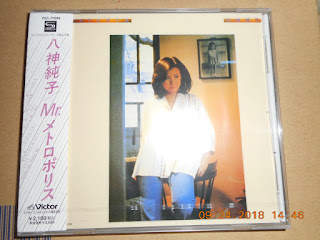 Nope, this song didn't come from Junko Yagami's（八神純子）"Mr. Metropolis"（Mr.メトロポリス）. In fact, I have yet to get her February 1982 "Yume Miru Koro wo Sugite mo"（夢みる頃を過ぎても...Even If The Time to Dream Passes）, but perhaps her 4th original album will be on my Xmas wish list.


The opportunity sounds awfully tempting especially after listening to "Ichi-nen Mae no Koibito" (Year-Ago Lover), a mid-tempo mellow song written, composed and performed by Yagami with her usual aplomb with arrangement by Masataka Matsutoya（松任谷正隆）. There's something even slightly Bacharach (the strings and the horns) about the whole thing which concerns some romantic redemption after a potentially relationship-killing lovers' fight some twelve months ago.

Considering so many kayo kyoku about post-relationship periods just have the protagonist wistfully remembering what was and what will never be again, it's wonderful to hear that "Ichi-nen Mae no Koibito" has the couple willing to pick up the pieces and make another go of it. Perhaps Yagami is the guardian angel in all this. As for "Yume Miru Koro wo Sugite mo", it peaked at No. 2 on Oricon and ended up as the 34th-ranked album for 1982.
Posted by J-Canuck at 3:37 PM