This morning, I did something that I hadn't done in 37 years. No...not that, my bladder is still as tight as a kettle drum. Actually, I am referring to the fact that I painted fences for the first time since the summer of 1983 since our superintendent sent around a flyer asking residents to handle the painting of their area fences over the weekend. So I went to the superintendent's office yesterday morning to pick up the stain, the brush and the stir stick and waited until this morning to get started because yesterday was a meteorological washout. Today, however, is a fine day so I got out after breakfast and did Part 1 of the job in about an hour. It was rather nice to be doing something outside of translating, teaching or blogging for a change.

As I said, the summer of 1983 was the time for me to earn my first amount of money in a summer job, so I got to paint a whole ton of fences during July and August for a particular townhouse area in Agincourt in the northeastern part of Toronto. I also had to pick up garbage and water the lawns in what was a pretty hot summer. Ended up with the worst case of athlete's foot but all in all, it was good honest work to earn some money for university.


It was also a somewhat eerie experience because for most of my days there, I swore that I thought I was the only person anywhere in the development. I gather that most of the adults were off at work and the kids were off to summer camp. Whenever I needed more paint, I would leave a message for my boss, and by the next morning, the paint would be there without me ever meeting the delivery person.

However having said that, at one point, there was one townhouse resident who apparently had his/her radio on fairly loudly and it was playing all sorts of pop music. The one song that I remember distinctly was "Never Gonna Let You Go" that had been produced by Sergio Mendes as an April 1983 single and was also included on his self-titled album that came out the same time. It was created by Cynthia Weil and Barry Mann and sung by Joe Pizzulo and Leeza Miller to become a No. 1 hit on Billboard's Adult Contemporary chart. Apparently, though, according to Wikipedia, "Never Gonna Let You Go" in the form I know wasn't the first rodeo for the romantic ballad. In 1982, Dionne Warwick and Stevie Woods recorded their own versions on their own albums, but the Pizzulo and Miller version was the one to take things to the top.

For all intents and purposes, that was the first time I had ever heard of Sergio Mendes...through his AOR phase in the 1980s. It wouldn't be until much later that I learned about his major contributions to bossa nova through Brasil '66, and of course, their classic "Mas que Nada".


"Never Gonna Let You Go" is a ballad that is so 1980s that it can make me want to put on a skinny tie and grow a mullet again. And in fact, when I got out to do the painting, that very song entered my head once more. But it wasn't just something that I heard out among the wooden fences. I also knew about how popular it was because of the late Casey Kasem's televised "America's Top 10" in which it got plenty of notice (although the program above doesn't have it in the Top 10 here).

Speaking of discovering someone anew, I had no idea that Kasem had been a veteran radio DJ and was surprised to find out that the voice actor behind Shaggy of "Scooby Doo" and team leader Mark on the imported and dubbed version of "Gatchaman" (aka "Battle of the Planets") had been spinning discs all this time. Now...back to the countdown. 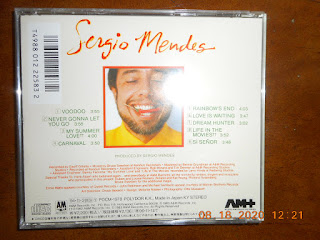