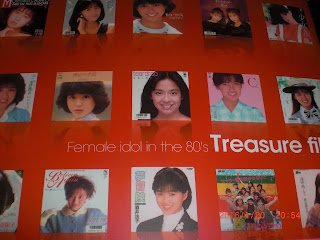 As much as I talk about the 10/90 ratio of the City Pop iceberg, I think there is also a similar thing with the 1980s aidoru iceberg. For every Seiko Matsuda（松田聖子）, Akina Nakamori（中森明菜）and any A-lister aidoru, there is probably a dozen unknown teenyboppers that never float to the cream of the crop. In some cases, there is a good reason for that, but sometimes I believe that for some of them, things simply didn't luck out despite having a decent voice.


One of the latter variety is Yumi Yano（矢野有美）. Born in Kagawa Prefecture but raised in Tokyo, she was once discovered by a talent scout when she was in Grade 6, but her parents understandably refused to let their daughter go into show business. However in 1981 when she was in her final year of junior high school, the same scout made another approach and this time, Mom and Dad relented. It looks like young Yano began with some modeling gigs for magazines.

Later that year, she and six other teenage girls were selected to become the aidoru group Shower（シャワー）as part of an ad campaign for an after-shower perfume by Shiseido which generated two singles in the first half of 1982. But then a few years later in 1985, Yano went solo and ended up releasing three singles plus a 12" single and one album.

That one album was called "Glass no Border"（ガラスの国境...Glass Border） released in September 1985. I've been enjoying the opening track and Yano's final single (released in July), "Natsu e no Tegami" (A Letter for Summer) which was written by Osamu Takahashi（高橋修）and composed by PSY-S member Masaya Matsuura（松浦雅也）. Knowing Matsuura's work with PSY-S from that year, I'm not surprised with the light and bubbly synthpop in "Natsu e no Tegami", and the synths used here bring in a lot of nostalgic feelings. Yano herself doesn't have an incredible voice but it's definitely a steady-on aidoru delivery (at least in the recording booth), and I have to say that looking at the cover for "Glass no Border", that hairdo of hers back then makes her look like Akina Nakamori.


According to her J-Wiki profile, in 1986 Yano went over to California to study while still in the middle of her aidoru career. However, a shotgun wedding situation occurred which necessitated early retirement from the geinokai...at least from the aidoru part of it. Returning back to Japan with her son, Yano joined up with a modeling agency and was working as a model into the early 1990s at least.
Posted by J-Canuck at 8:32 PM