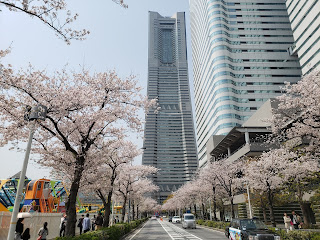 Ahhh...good heavens! Rockabilly greasers twisting away in Yoyogi Park have been in existence since the late 1970s probably. I even remember America's "Entertainment Tonight" focusing on those guys one night. Just kinda wonder what the trigger was for the young folks back then to emulate the rock n' roll of the 1950s.


Maybe part of it was the advent of the Downtown Boogie-Woogie Band with their eternal "Minato no Yoko, Yokohama Yokosuka" （港のヨーコ・ヨコハマ・ヨコスカ）in 1975 (and of course, I also think about the band Carol even earlier). However, another band that brought that rough n' tumble rock n' roll image was THE CRAZY RIDER Yokohama Ginbae ROLLING SPECIAL（THE CRAZY RIDER 横浜銀蝿 ROLLING SPECIAL） at the turn of the decade into the 1980s. I saw them perform once again on NHK's "Uta Kon"（うたコン）a few weeks ago.

Commenter T-cat contributed the first full article on Yokohama Ginbae (Yokohama Silver Fly) back in 2018 via the band's "Shogun Kaoru ‘Wolf Ryu" (羯徒毘路薫狼琉), and T-cat was also good enough to provide the original lineup. However, I have to make one correction on the name of one of the members. The drummer is actually named Ran, as in Yoshiyuki "Ran" Tamiya（田宮淑行）, and not Arashi. Ran is just one other reading of the kanji（嵐）.

Yokohama Ginbae's performance on "Uta Kon" was for their 2nd single "Tsuppari High School Rock n' Roll" (Delinquent High School Rock n' Roll) released in January 1981. Specifically, it's been given the additional moniker of the "Toukou Hen"（登校編...At School Version） in contrast with later versions (including a special "Social Distancing" version on the show). Ran was behind the words and music of this short and spicy ode to all things troublemaking 50s teenage rock n' roll. Still in the song, main vocalist Sho（翔）wants to let the mothers know that although they may be a bit rough around the edges, they're still good lads at heart following their own paths...I hope.


"Tsuppari High School Rock n' Roll" peaked at No. 2 and became the 15th-ranked single for 1981. As for how the band got its name, Sho, Taku, Johnny and Ran got started in September 1979 and one time, the owner of an establishment that the guys frequented once blasted out "You guys are as annoying as silver flies!" which had Ran going "Hmmm....", according to an interview with Yokohama Ginbae to commemorate the band's 40th anniversary at Hama Repo via J-Wiki. Sho also mentioned that he and the guys had wanted to be No. 1 at something right from the get-go, so they opted to go for Japan's longest band name, and thus officially, they took on THE CRAZY RIDER Yokohama Ginbae ROLLING SPECIAL.

As T-cat mentioned in his article, 50% of pop music is style, so I'd say that Yokohama Ginbae with the ideas in the above paragraph and their appearance/attitude in the sunglasses, leather jackets and pompadours pretty much launched themselves into pop culture style history. They made their mark at the right time and place. No band could have asked for anything more to start a career.
Posted by J-Canuck at 4:14 PM