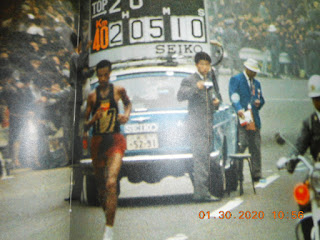 For anyone who knows me on sight, to realize that I actually ran a half-marathon would probably have that person performing the biggest and wettest of spit takes to make the late entertainer Danny Thomas take notice. Mind you, that was back in 1981 a few months before the trip to Japan when a classmate and I ran the annual Toronto Zoo marathon...when I actually was thin. Even with months of training, the half-marathon of 21 kilometres almost knocked me out although I did finish it much to my own pride and health. Soaked in the tub for a good long time.


In late June, I gave this story about watching the weekend NHK sports broadcast and seeing how one athlete listened to The Blue Hearts' "Hito ni Yasashiku"（人にやさしく）to encourage him. Well, on an even earlier broadcast of that same show, there was a marathon runner who also had his own special song to rely upon.

That song was "Kodoku no Marathon Runner" (Lonely Marathon Runner) from 1977 which is a spritely folk tune by The Natashar Seven（ザ・ナターシャー・セブン）. According to their J-Wiki profile, the band was first formed in 1971 with the meeting between singer Tomoya Takaishi（高石ともや）and Junji Shirota（城田じゅんじ）, the latter having already taken up some Bluegrass banjo. With later additions including Shogo Sakaniwa（坂庭しょうご）and Takasuke Kida（木田たかすけ）, The Natashar Seven polished their brand on a mix of Bluegrass country, American traditional folk and Japanese minyo. As for the derivation of the band name, it was based on a slight alteration of the name of the village where Takaishi had lived, Natashou（名田庄）in Fukui Prefecture (although the village merged with the town of Oi in March 2006). The seven part was added merely because it sounded nice although quite a few people joined the band's ranks between 1971 and 2002.


Written and composed by fellow folk artist Osamu Kitayama（北山修）under his pen name of Haijin Jisetsu（自切排人）, this happy number reminds me a lot of what I used to hear as a kid in my own country of Canada and also on some of those country-western music shows such as "Hee Haw" produced in the United States. It's just so jaunty that I could almost be persuaded to put on the shorts and sneakers and run a few kilos again (as if).

I thought Kitayama's lyrics were literally on that lonely marathon runner, but looking at them, I think they are actually more of a metaphor for all of those young people getting on the treadmill of work and adult life. Perhaps The Natashar Seven and Kitayama were doing their part to give the lads and lassies that encouraging push through society. If that is indeed the case, then that athlete who was featured on NHK probably chose his song wisely.
Posted by J-Canuck at 3:05 PM