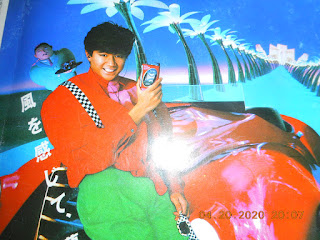 I've talked about this a number of times through the relevant articles over the life of this blog, but in the summer of 1982, it was my brother's turn to head to Japan for his own Japanese Language School graduation trip. When he returned, he brought back three 45" singles: Seiko Matsuda's（松田聖子）"Komugi Iro no Mermaid" (小麦色のマーメイド）, Hiromi Iwasaki's（岩崎宏美）"Madonna Tachi no Lullaby" (聖母たちのララバイ）and Masahiko Kondo's（近藤真彦）1981 "Blue Jeans Memory" （ブルー・ジーンズ・メモリー）.

They're all very cherished records and I've been able to write about all of the A-sides. However, the B-sides took a little while longer although I could get to Seiko-chan's "Madras Check no Koibito" （マドラス・チェックの恋人）easily enough. Iwasaki's "Akai Ito"（赤い糸）was a tough one and I had thought that it would never show itself on YouTube, but happily it finally did so a few months ago.


So that only left Matchy's B-side. Once again, I was wondering whether that would be another song whose existence would never see the light of YouTube day. But then, just a week ago, it miraculously appeared. Ladies and gentlemen and Matchy fans, allow me to introduce "Seishun Beach" (Teenage Beach).

As one commenter for the video put it, it's a song that not a lot of folks know or remember, so I can glean that maybe "Seishun Beach" never made it onto a BEST compilation or even a regular album by Kondo. However, it's a song that is short, sweet and fun for me. Compared to the hot motorcycle song powered by octane and testosterone that is "Blue Jeans Memory" by the legendary songwriting duo Takashi Matsumoto and Kyohei Tsutsumi（松本隆・筒美京平）, "Seishun Beach" is the chill fun-in-the-sun good-times song by Hisashi Suzuki（すずきひさし）and Koji Makaino（馬飼野浩二）.

Makaino also arranged "Seishun Beach" and it sounds like he was watching a lot of "Beach Blanket Bingo" with Annette Funicello and Frankie Avalon before the songwriter started on this project. I can imagine the kids down on Shonan twisting in the sand to this one. However, according to the J-Wiki article for "Blue Jeans Memory", "Seishun Beach" was used for a Konica Camera commercial featuring Matchy.

Well, I'm happy to have finally covered the A-sides and B-sides for this trifecta. Twist again! 👍