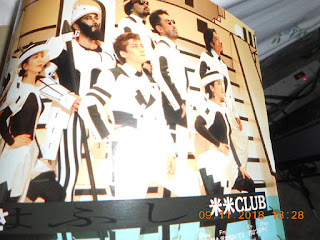 It's been a while since I've written about good ol' Kome Kome Club（米米CLUB）and their brand of dynamic music and performance. To be honest, I thought that this particular song by them was a much later creation but actually, "TIME STOP" is one of their earlier singles, their 8th to be exact, from October 1988.

Written and composed by K2C, I've got this on their BEST compilation, and "TIME STOP" comes across as the ideal number to be played near the end of one of their concerts...just before the inevitable encores are called for, and it's pretty much inevitable that K2C has plenty of encores. But without getting too far off point, "TIME STOP" has that feeling of a satisfying end to a busy day or busy date (or something) with Carl Smoky Ishii（カールスモーキー石井）giving out his heartfelt message of love (some wonderfully soaring and soulful vocals) to the lucky woman.

Y'know, I haven't seen an episode of "Saturday Night Live" in ages but from what I remember from the old days of comedians such as Chevy Chase, Bill Murray and Gilda Radner, each episode ended with the house band playing something similarly mellow to "TIME STOP" to let the audience know that things were coming to a close. The song has some fine sunset horns to finish things during a final slow dance. In any case, "TIME STOP" did moderately well by peaking at No. 25. It was also a track on K2C's 4th album "Go Funk" released in September 1988; that album hit No. 1 and ended up ranked No. 25 for the year.