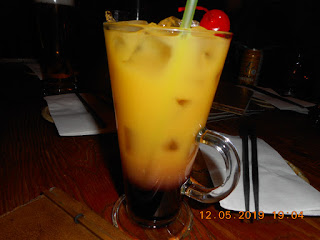 For those who have encountered some of my statements on drinking within the articles here and there, I think you'll already know that I've had a certain sweet tooth for the sweeter cocktails. The Brown Cow is my go-to cocktail but at various bars here and in Japan, I've also enjoyed the sugar-filled delights of a Creamsicle and an Irish Coffee. There are also the bartenders' own creations such as this libation called the Cherry Blossom that I drank at Kintaro (as shown above), one of the newer izakaya in downtown Toronto, back last year during the Holidays.


It appears that the good folks in the J-fusion group Parachute have also enjoyed their own mixological concoctions, and indeed the star-laden lineup including Yoshihiko Ando（安藤芳彦）, Izumi Kobayashi（小林泉美） and Masaki Matsubara（松原正樹） all get in their own favourites through the song "Cocktail Night". Cocktails such as the Tequila Sunrise, the Vodka Collins and the Blue Hawaii all get their due in this light and frothy tune written and composed by keyboardist Ando.

"Cocktail Night" was included in Parachute's 1981 album "HAERE MAI", and there is something quite Margaritaville in the shaker here. Although I have yet to set foot in any drinking establishment since this pandemic began, I'm hoping that I will get my old cocktail in a bar again in the not-too-distant future. Have a listen to their "Hercules" as well.