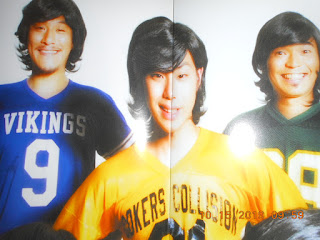 Not sure how Takkyu Ishino（石野卓球）, Pierre Taki（ピエール瀧）and the rest of the guys from oft-comical techno unit Denki Groove（電気グルーヴ）felt right at the beginning of their career in the late 1980s. They must have felt full of beans and other energies at the possibilities with all of their wacky ideas and musical equipment of synthesizers and samplers.

My impression from this opening track from "662 BPM BY DG" (June 1990), their very first album under an indies label, SSE, is that Ishino and the rest of Denki Groove were more than happy to hit the tarmac running. "Denki Biri Biri" (Electric Shock), written and composed by Ishino, feels to me like it sucked in its fair share of samples, a slice of New Order, a dollop of Tetsuya Komuro（小室哲哉）and even a good handful of Beastie Boys. Part of the fun is trying to identify the sources of those samples; I could pick out Eddie Murphy, Depeche Mode and Robocop so far within "Denki Biri Biri", and according to the article for the album, Denki Groove brought in tons of those samples. There is even a list of those samples in the article.


Looks like Ishino and Taki took some playful pokes at a couple of those synth lords in the lyrics, the aforementioned Komuro and Ryuichi Sakamoto（坂本龍一）, and were more than proud to show off their cool shiny equipment. Nothing like some healthy rivalry from the young guns at Denki Groove, and they really liked getting the listeners off their duffs and dancing on the floor...provided that there was some room to do so.
Posted by J-Canuck at 8:18 PM