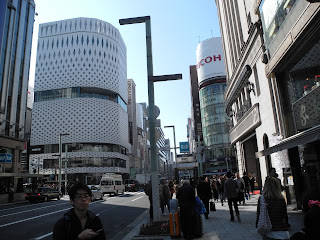 I've been wanting to write about this rarity for a while now. In fact, I've already dabbled into Atsuko Nina's（二名敦子）"City" album from 1981, although this hadn't been released under that second stage name. It was actually put out under Nina's first stage name of Eri Hayakawa（早川英梨）. A year ago, I wrote about the first track, the mellow City Pop "Metamol City"（メタモル・シティ）.


Thankfully, I was able to encounter a number of the tracks via YouTube so the first one up is "Last Typhoon"（ラスト タイフーン）created by lyricist Yoshiko Miura（三浦徳子）and composer Ken Sato（佐藤健）. This is a fun and bouncy number that enjoys its West Coast AOR roots, and I'd think that American TV theme master Mike Post may want to nod in approval.


"You Move Me!" has a striking intro and overall arrangement which brings some memories of disco and Bee Gees and perhaps even Rod Stewart when he was into the genre. I could easily envisage ladies in their day-glo outfits and roller skates snapping their fingers and swiveling their hips to this number although perhaps the tempo is a little slower. The same duo of Miura and Sato were responsible for "You Move Me" as well.


"Plastic Lady"（プラスティック・レディ）takes things into different territory that's more mindful of late 1970s Junko Yagami（八神純子）and Keiko Maruyama（丸山圭子）. It's got some of that Latin jazz to be heard in a swanky nightclub and I think Hayakawa even channels some of those two chanteuses' vocals. Daisuke Inoue（井上大輔）was responsible for the melody while Yukari Ito（砂東由加利）provided the lyrics, although from the kanji, I don't think this is the famous kayo singer here.


"Dramatic Good Night"（ドラマティック・グッドナイト）sounds like a date ending on a very happy note with some lingering thoughts of happiness before bedtime. It speeds by at a nice clip and picks up some country and even a Boz Scaggs riff along the way. It's quite the City Pop couple behind this one: Tomoko Aran（亜蘭知子）on lyrics and Tetsuji Hayashi（林哲司）on music, but ultimately it's perhaps not the strongest track on "City".


The final one I will tackle here is "Sorry" which first impresses me with that down-home City Pop beat popularized by Akira Terao（寺尾聡）in his "Reflections" album from the same year. Written once again by Ito and composed by Casey Rankin, that combination of electric guitar and keyboards at points reminds me of Airplay and again I get some of that Yagami delivery in Hayakawa's vocals, especially in the refrain.

The original release of "City" was entirely arranged by Tsugutoshi Goto（後藤次利）. Meanwhile, the remastered version also contains a couple of bonus tracks in the form of the A and B sides of Hayakawa's 1979 debut single "Sasowarete Natsu"（誘われて夏）with the B-side being "Yurenagara Futari"（ゆれながら二人...A Swaying Couple）. It looks like Tower Records was responsible for that re-release but alas, currently "City" is not taking any online orders. However, you can listen to the full album right here.
Posted by J-Canuck at 4:09 PM