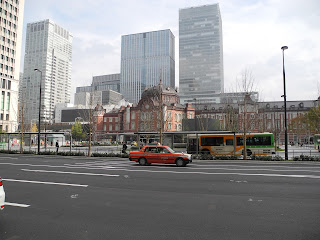 Heading back home from the Tokyo area back to Toronto for good almost a decade ago on December 15th 2011 wasn't particularly emotional although it did feel rather strange since I'd been living in my modest little 2K apartment for virtually all of my 17 years in my satellite city of Ichikawa, Chiba Prefecture. I took one last look at my suddenly barren abode, locked her up, rode the Tozai Line over to the next station, Gyotoku, with my very full suitcase in tow and handed the key over to the real estate agency that had been supervising the apartment building all this time. Finally, I headed off to Narita Airport.✈ Didn't hear any of those swelling John Williams strings or anything like that.


Certainly, I didn't hear this song either although it could have made for a fine coda as Air Canada lifted me home. This would be "Goodbye Tokyo" by Tetsuji Hayashi（林哲司）from his 1980 3rd album "Summer Wine"（サマー・ワイン）. Composed by veteran Hayashi and written by Machiko Ryu（竜真知子）, it begins with a keyboard passage that reminds me of the intro for Ray Kennedy's "My Everlasting Love" and continues onto a bittersweet/melancholy requiem before the epic refrain punctuated by some West Coast AOR electric guitar.

I don't recall what the weather was like when my plane departed Narita, but the way that "Goodbye Tokyo" flows, perhaps Hayashi envisioned a bright orange sunset seeing off the plane as it went off to its next destination. Not sure what I was even thinking when I was heading home forever...maybe start a new blog? Nah!🗼


To finish off, here is Kennedy's "My Everlasting Love". He is also included in an article that I wrote about a Junko Yagami（八神純子）song.
Posted by J-Canuck at 3:52 PM