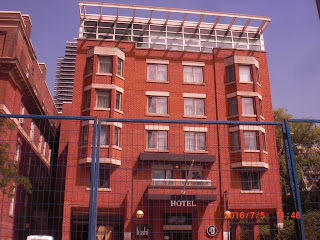 Looking at what is trending on Twitter today, apparently today is National Nude Day. I'm fairly conservative about that sort of thing but I can promise you that I will give my respect to it later tonight when I take my shower.

However, perhaps I can be a bit daring right now and show off the cover for Juicy Fruits'（ジューシィ・フルーツ）5th album "Tennen Caffeine"（天然カフェイン...Natural Caffeine）. Released in June 1983, the band led by vocalist/guitarist Atsuko Okuno（奥野敦子）is looking considerably less clothed for some reason.

Okuno was also behind the music for the first track "Natsu Kaze Afternoon" (Summer Cold Afternoon) with Machiko Ryu（竜真知子）providing the lyrics. Not quite as quirky as Juicy Fruits' most famous song "Jenny wa Gokigen Naname"（ジェニーはご機嫌ななめ）, it's still got that light but propulsive New Wave beat as Okuno sings about a tryst that hasn't taken place with the excuse by one of the partners being that nasty summer cold.

So far, I haven't come across any Juicy Fruits songs that have been mundane at all. Maybe they were ahead of their time at that time, but a few decades later, I'm sure that they've picked up some more fans with their brand of pop.
Posted by J-Canuck at 4:26 PM