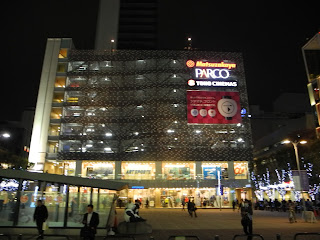 Happy Friday, and for my fellow Torontonians and folks in Peel Region, let's all welcome ourselves to Stage 3 of recovery, although I think that we will all need to straddle that tightrope between enjoying our return of lost freedoms and keeping safe from COVID-19. On the other hand, I'm hoping that somehow Tokyo and the rest of Japan get a handle on another wave of the pandemic that has been washing ashore for the past several days.

On a happier note, I've encountered another YouTube video, this time by Kimi no Station: The Home of City Pop, on which a Japanese talk-variety show covers the international appeal of City Pop that has been grabbing the attention of Japanese media over the past several months. Seeing these fellows voraciously browsing and buying up genre albums and CDs in areas like Shibuya has me reminiscing about the old days when I engaged in my pastime of frequently hitting Tower Records, Tacto, Yamano Music and RecoFAN for any of the good ol' stuff. I probably won't be able to head back to Tokyo any time soon but hopefully, when I do hit my old home, I will be flipping through the discs and LPs once more.

The amusing thing about the above report is how while one of the City Pop browsers holding the Toshiki Kadomatsu（角松敏生）LP actually sounds quite calm and collected about his potential purchase, the fellow providing the Japanese voiceover translation comes across as if he were about to experience his first orgasm.😤


In any case, it is a Friday so let's provide the first City Pop song of the day. It's actually been over a couple of years since Nanako Sato（佐藤奈々子）has made her last appearance as a performer on the pages of "Kayo Kyoku Plus", so I'm more than happy to bring her back. This time around, we have "Koi no Ryuusei" from her 3rd album "Pillow Talk" released in October 1978.

Written and composed by Sato and with co-composing help by Motoharu Sano（佐野元春）, "Koi no Ryuusei" (Meteor of Love) is a smoothly-running song of the genre, perfect for that sunset or early evening drive on the main thoroughfares of Tokyo. Sato's kittenish vocals are very enticing over the driving rhythms and the snappy percussion. It's almost as if the singer is beckoning us listeners by curling her fingers inward through her voice. Of course, there has got to be the sax solo.

Now, the title "Koi no Ryuusei" is very similar to the title of another City Pop classic "Koi wa Ryuusei" (恋は流星...Shooting Star of Love） by Minako Yoshida（吉田美奈子）who had introduced it the year before, so if you're searching for either, keep an eye out for those Japanese grammatical particles.
Posted by J-Canuck at 3:11 PM