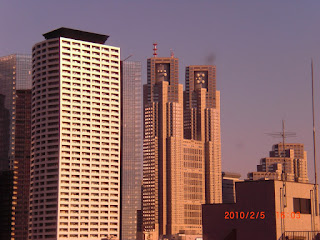 Wow! Haven't used this photo as a thumbnail for a long time, and this was taken over 10 years ago when the English school where I was teaching at was located in Nakano-Sakaue, Tokyo (west of Shinjuku). The view was from the window right by the table where the student and teacher had their lesson, and it faced east toward the skyscrapers in West Shinjuku including the Tokyo Metropolitan Government Building (basically City Hall). Always loved the fact that I could take this shot at sunset.


Appropriately enough, I have another City Pop tune for tonight, but this one is straight out of the 1980s. This would be the band Stardust Revue（スターダストレビュー）and their 6th single "Omoide ni Kawaru made" (Until My Memories Change) from January 1985.

Nice beat in there carrying the melody along, and it reminds me a lot of the rhythm in Minako Yoshida's（吉田美奈子）classic "TOWN". Words and music were provided by band keyboardist Yasuhiro Mitani（三谷泰弘）and those lyrics tell of a melancholy story of the breakup and resulting shock for a fellow possibly at high noon and by a major intersection. Not exactly looking for privacy, I take it? Well, the music is pretty jaunty anyways. The single was also included in Stardust Revue's March 1985 3rd album "Thank You".

Another reason that I went with vocalist Kaname Nemoto（根本要）and his band was that I just saw them on an episode of NHK's "Lunch ON!" show about working folks and their lunch habits. Apparently, Nemoto does love his spicy curry!
Posted by J-Canuck at 7:59 PM