Jin Kirigaya -- Return to the Sky 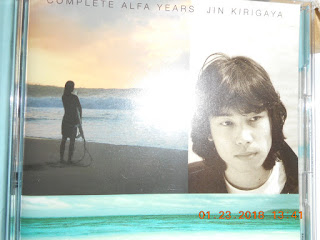 It's after dinner as I write this and I need time to digest the Friday meal (especially with all of that fibre). Well, I don't really drink so no digestif for me.


However, I can get that effect to a certain extent thanks to a Jin Kirigaya（桐ヶ谷仁）number called "Return to the Sky" from his 1979 debut album "My Love For You". The album also has the melancholy "Yotsuya Yuumagure"（四ツ谷ゆうまぐれ）which involves a man dealing with perceived romantic betrayal. However, "Return to the Sky" is quite the opposite, thanks to that mélange of a bit of jazz here and a good dollop of bossa nova there within an AOR arrangement. Interesting thing I noticed was how Kirigaya's vocals sound like a combination of the voices of Kazumasa Oda（小田和正）and Yasuhiro Suzuki（鈴木康博）from the band Off-Course（オフコース）.

Kirigaya took care of the music while Fumiko Okada（岡田冨美子）provided the lyrics. As I said in the "Yotsuya" article, I purchased that double-CD package "Complete Alfa Years - Jin Kirigaya" which consists of his first two albums, the aforementioned "My Love For You" and then his 1981 "Windy". While "Windy" is more solidly in the City Pop/AOR genres, I think "My Love For You" is a bit more free-wheeling as the singer-songwriter was probably exploring across the music spectrum which might explain some of the influences in this track especially.
Posted by J-Canuck at 7:50 PM