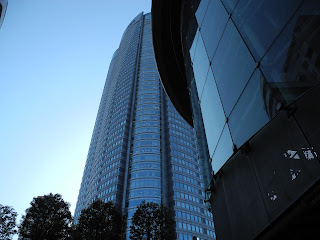 Did my fair share of karaoke and disco-hitting back in the late 1980s with university friends. When I look back at how late I slunk back home and how Mom chastised me for smelling like downtown Toronto on a bender, I rather marvel at how I managed to do that now that I can barely stay up past eleven at night. Dancing is longer an option for me because I would be breaking a hip instead of being hip.


Still, I can shimmy up a storm in my comfy chair as I listen to "Dancing Until Dawn" which is a track on Seikou Nagaoka's（長岡成貢）2009 album "Romantic Gold" with singer Adya. I usually don't wish to become younger again but when I hear stuff like this, it would be nice to go out with my de-aged pals and hit the dance floor once more. I get all sorts of really cool urban contemporary vibe in Japan here. I hear BLU-SWING and Mondo Grosso. As well, there is a nice shoutout to Bobby Caldwell's classic "What You Won't Do For Love" near the end.

But I was wondering about that name Seikou Nagaoka since I believe that I'd heard it before. In fact, I did. Nagaoka has been around for decades and he's a composer, arranger and music producer that has done everything, and I knew him as the fellow who came up with the majestic theme for the anime "Shinpi no Sekai El-Hazard"（神秘の世界エルハザード）back in 1995, and even earlier, he composed SMAP's "SMAP" in 1988 (he's come up with many SMAP tunes). There's a long list of his compositions for many singers including Mika Nakashima（中島美嘉）and Chemistry at his J-Wiki file.

Listening to "Shinpi no Sekai El-Hazard" again and then coming across "Dancing Until Dawn" is like imagining John Williams or Alan Silvestri creating one of his amazing movie scores before taking off the turtleneck sweater and putting on a T-shirt and baseball cap to man the turntables at his favourite dance club beyond the midnight hour.

Nagaoka hails from Mie Prefecture and he taught himself the basics on orchestra and composition before heading up to Tokyo to fulfill his dream of creating movie soundtracks. He has done that and much more.
Posted by J-Canuck at 2:53 PM