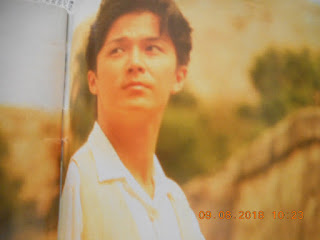 For the very first Masaharu Fukuyama（福山雅治）article I provided on "Kayo Kyoku Plus", "Gang★", I actually described the comely singer-songwriter and actor as a Japanese incarnation of the Doctor from "Doctor Who". At the time I was a pretty big fan of the sci-fi franchise and Fukuyama himself was starring in the drama "Galileo" as that eccentric crime-solving physicist.

Nowadays, though, I've been seeing the fellow as one of the nicest invitees to a party that one could ever have (David Tennant seems to be that, too). He just strikes me as the guy you want to have to take care of the conversation on the sofa or even provide some music while the host of the party is busy with other things such as cooking and greeting more guests at the door. I haven't really seen too many of his interviews but from what I have watched, perhaps I can say that he's one of the more down-to-earth celebrities that I've seen on TV.


If guest Fukuyama were to entertain his fellow partygoers, then this is the song that I would envisage him performing. His 27th single from August 2011, "Kazoku ni Narou yo" (Hey, Let's Become a Family) is so homey and comfortable that a fireplace and a pot of soup would miraculously appear right by the stereo. Written and composed and arranged by Fukuyama with help by Akira Inoue（井上鑑）, the lyrics were created during the downtime faced by the singer when his nationwide tour had been interrupted because of the 2011 earthquake in the Tohoku region. The song then became the campaign tune for a Recruit magazine specializing in weddings called "Zexy".


"Kazoku ni Narou yo" hit No. 1 on Oricon and became the No. 20 single for 2011. On CD, the song went Platinum with it selling 155,000 copies in its first week of release alone. Even bigger news was that, according to "Oricon Music", with the success of this single, Fukuyama became the solo male artist in Japanese pop music history to sell the largest number of singles and albums combined (approx. 13 million singles and 8 million albums), taking over from Tsuyoshi Nagabuchi（長渕剛）who had held the record for 22 years.

The song also garnered an invitation from NHK to the Kokahu Utagassen for 2011 in which Fukuyama performed it at the Pacifico Yokohama Convention Centre. "Kazoku ni Narou yo" is also a track on his 11th original album "Human" which was released in April 2014. This album was in the No. 1 spot for 2 weeks running and was the No. 7 album of the year, going Platinum.
Posted by J-Canuck at 1:57 PM