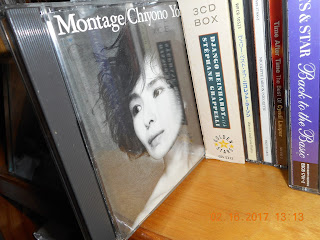 I gather that there is some sort of record in this. To explain, this is the first time probably in "Kayo Kyoku Plus" history that I've written about two City Pop songs by two different female singers, each with the Japanese word sasowarete on the same day. One is the first article I did earlier this afternoon, Eri Hayakawa's（早川英梨）"Sasowarete Natsu"（誘われて夏）.


This article is on pop singer Chiyono Yoshino's（吉野千代乃）3rd single "Slow Dance ni Sasowarete" (Invite Me For A Slow Dance) from October 1986. Sweet, sultry and smoky, nonetheless I was at first wondering whether the song could still be categorized as a City Pop number but I couldn't help but feel the urban contemporary nature of it all. Even though there isn't a really huge boppy bass in there, there is the bluesy saxophone, and the strings and keyboard bring that certain air of sophisticated pop.

"Slow Dance ni Sasowarete" was written by Goro Matsui（松井五郎）and composed by Hideya Nakazaki（中崎英也）, and is the first track on Yoshino's 2nd album "SLOW DANCE" which came out on the same day as the single. I've just got the one album by her, "Montage" as you can see in the photo at the top but from listening to some of her other tunes on YouTube, I really ought to invest some more of her back catalog. She's starting to strike me as one of the more underrated pop singers in the 1980s.
Posted by J-Canuck at 8:55 PM