Happy Songs for Me 3 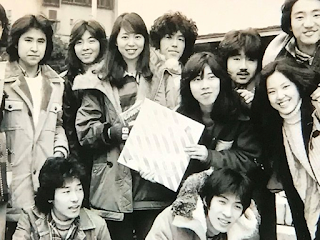 The above photo was something that Rocket Brown of Come Along Radio was very kind to send to me some weeks ago. If you look closely, you can see a very young Mariya Takeuchi（竹内まりや）in the middle of Masamichi Sugi（杉真理）and Red Stripes. With all that heavy garb, they look positively Canadian! I hope that provides some happiness especially to the Mariya fans out there.

And that is the point of this Author's Pick article. Over five years ago in March 2015, I posted up an article in commemoration of the United Nations' International Happiness Day on March 20th (coincidentally Mariya's birthday!) titled "Happy Songs for Me" which listed some of the many songs that have made or kept my spirits happy and light. Just a few months after that, I then provided "Happy Songs for Me 2" just to show that the list was far from complete.

Well in July 2020, I've decided to go for a three-peat. And I think it's especially important now when the pandemic and its various ill effects have left millions upon millions of people feeling anything but happy. Not to say that this article is going to provide the ultimate cure to the population of Earth obviously. However, perhaps for those who do like Japanese popular music, some of my choices in "Happy Songs for Me 3" (along with its two cousins) can be your choices that make you feel happy.

Here are my choices in no particular order:

For a fellow who got his education in all things Taeko（大貫妙子）first through her synthpop offerings at the turn of the decade into the 1980s, hearing the singer-songwriter going really high into the 1970s City Pop was quite the revelation. In the years since listening to "Summer Connection" repeatedly, this has become one of my summer must-hears and it's a grand aural sepia-toned photograph into the Tokyo hot season of that decade. Especially when the brass launches it and then she hits her highest notes in the song, I get to go to my happy place.

This wasn't the first Seiko-chan（松田聖子）song that I ever heard but it's been the one that has struck me as being one of the purest grin-giving aidoru numbers of the 1980s. When I first heard this on "Sounds of Japan" decades ago, I thought that this was the ultimate Seiko song. It's just a buoyant summer song of yesteryear powered by disco strings that takes flight over the beach and surf while the teen aidoru and a beau are frolicking the days away.

There's nothing like listening to an Anri（杏里）song from the 1980s with a Toshiki Kadomatsu（角松敏生） engine to drive the blues away. Of course, that includes many tunes but one of my very favourite is "Shyness Boy" from her "Timely!!" album. As soon as I hear this one on the stereo with the sunny brass, I get transported to wherever Anri was having her photograph taken on the cover of the album; I'm assuming that it's either Hawaii or Los Angeles. Just imagine the rise on the happiness scale when listening to "Shyness Boy" while in a convertible driving along the California coastline.

SLT's "Together" is already included in one of the previous "Happy" lists and while that is just one joyous caper through the city, "Mitsumeru Ai de"（みつめる愛で）has me preparing for a fun night out on the town. It's pure fantasy but this song is the theme for throwing on a Hugo Boss suit (that would probably have to go beyond its usual parameters to fit me), getting into a limo with the lady of my dreams (no comment on that), and tripping the light fantastic for dinner and drinking and dancing. Pianist Satoru Shionoya（塩谷哲）absolutely helps in batting this one out of the park.

One of my friends on the JET Programme frankly had the same attitude toward KAN's magnum opus "Ai wa Katsu"（愛は勝つ）that I had (and still have) toward natto: GET IT AWAY FROM ME! She really wasn't much for whimsical pop. For me, "Ai wa Katsu" was one of the musical touchstones in my life since it became that big hit during my two years in Gunma Prefecture. Perhaps the message is as corny as a field in the Midwest but the song still manages to prop up some happy memories of pop culture and life back then.

The next few entries involve some of the wonderful new urban contemporary acts in the last decade that I've discovered in the years since the first two "Happy" lists have come out. Case in point: the cool AOR duo Blue Peppers with vocalist Shiori Sasaki（佐々木詩織）with their "Roku-gatsu no Yume"（6月の夢）, one very happy-go-lucky number that deserves its own light sitcom set in a Tokyo suburb. I get some of that lovely Steely Dan vibe here and I still eagerly await that next album.

Around the same time that I first heard about Blue Peppers, I came across the coolness of BLU-SWING which has been around for over a decade. I really am a late bloomer. At least, I was fortunate to discover "Flash", a great calling card for the band and perhaps the theme song for the nightlife in any major city in Japan. With a combination of sultriness in the vocals and the snap-and-bang in the arrangement, any listener can potentially be enticed to plan a vacation for the metropolises of the nation (although unfortunately not now).

It was quite the re-introduction to Kirinji since I had known them mostly for their soulful ballads back in the early 2000s. How was I to know that the band made a change into catchy/spacey pop tunes some years back? And then I get hit with "Jikan ga nai"（時間がない）with its video that has gone worldwide with that middle-aged manager and his disco moves. I didn't stand a chance. Even now, as I write this, my shoulders instinctively started shimmying to the groove. I won't ever hit a dance floor but I can imagine that I'm on one thanks to this one.

Of course, I'm going to end this list with the first singer that I mentioned off the top. There's something so adorably 80s AOR about "Morning Glory" and since I'm a big AOR fan, it's downright Pavlovian how I react whenever I hear this track from "Miss M". Thankfully, I tend to get happy instead of salivating all over the CD. Maybe Tatsuro Yamashita（山下達郎）thought it was a little too AOR for his tastes, but I'm perfectly happy with his future wife's original (although Tats' version on "For You" is also fine).

Well, that is my third list of happy songs. I hope that at least some of them made you happy in these uncertain times. Already there are tunes that are stabbing me in the head demanding why I haven't included them so I'm pretty sure that there will be a fourth list sometime down the line without having to wait another five years. For commenters and collaborators, let me know what your happy song or songs are.
Posted by J-Canuck at 9:25 PM