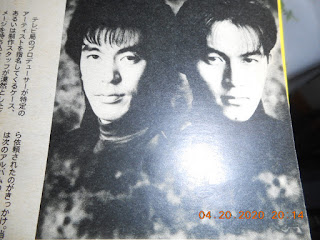 There is a fair share of people over here in Canada and the United States who have an interest in the supernatural, and that is also true for the Japanese. Folklore abounds there with tales of long-necked women, kappa sprites, and other creatures, and there are plenty of scary tales to chill listeners right down to the bone even in the hottest of summers.


One of the more recent phenomena to get folks' hackles up is the shinrei shashin（心霊写真...ghost pictures） in which faces or other body parts mysteriously pop up behind people and in structures. Personally, I think it's more of a visual coincidence or a double exposure in those photos than anything else but I've watched variety shows in which the tarento turned multiple shades of blue and grey and screamed their heads off at all sorts of weird shots. The above video has about 7 minutes' worth of shinrei shashin so watch...if you dare.😝😝

Another phenomenon is the audio version of the shinrei shashin...ghost sounds. Years ago when I was living in Ichikawa, a couple of my good single friends who used to visit me all the time at home (they are now both happily married with kids) dropped in one time and told me about the urban legend that a Dreams Come True single "go for it!" had some weird voice pop up near the end. Now, I did write about that song all the way back in 2013 but never mentioned this part since frankly I had forgotten the whole incident, but I did have the CD so I played it on the Onkyo a couple of times for them with the volume way up.

Now, the supposed weird voice pops up at about 2:54 in the above video (Sorry but the recorded version has been taken down so you'll have to rely on your own copies) for "go for it!". My good buddies' faces froze when they heard it but I couldn't quite get it myself since I had heard it every time that I played the cheerful DCT song. To me, it was just an added spoken vocal for flavour...not an anguished cry from Hell.😏 I looked at them, both of who were/are far more kakkoii than me, and wondered what the problem was here.


There was a similar story regarding rock band B'z. Their November 1990 album "Risky" was a big No. 1 hit to be sure, but it also garnered some more infamy and the story even reached the popular Fuji-TV noon hour show "Waratte Ii Tomo!"（笑っていいとも！）one day in 1993. Supposedly, certain CD copies of the album didn't start off with that 1-minute-and-change instrumental which was the title track. Instead, as host Tamori and comedy duo Utchan-Nanchan found out, it started out with a moaning female voice. Consider your hackles risen!😱

Anyways, here is that first track "Risky" from the album of the same name, sans spooky voice (although there is some sexy exhalation in there...I'd take that). At the end, vocalist Koshi Inaba（稲葉浩志）poses the question "Where do we go?".

Well, let's go to another track "Itoshii Hito yo Good Night" (My Dearie, Good Night) which also happened to be the duo's 7th single released in October 1990. The song was also tagged as the first B'z ballad to be released as a single, and it sounds like a song that should have been added to the "Top Gun" soundtrack. Just something about that proud and elegiac guitar in the intro and the more emotional heft in Inaba's vocals.

However, it was actually made into the ending theme for the TV Asahi drama "Daihyo Torishimayaku Deka"（代表取締役刑事...Representative Director Detective） from that same year. Well, we've had a busybody maid, two housewives and high school students become sleuths on live-action TV from my memories. Why not a representative director?

Not surprisingly, "Itoshii Hito yo Good Night" hit No. 1 and went Platinum, selling 354,000 copies according to Wikipedia. It would become the 62nd-ranked single for 1990. As for "Risky" the album, it was truly the gift that kept on giving (spooky-voiced copies aside) because it wouldn't only be the 26th-ranked album of 1990, but also the 10th-ranked album for 1991 and finally the 50th-ranked album for 1992. In total, it sold almost 1.7 million copies! For the record stores and supervising studio, not risky at all! Incidentally, "Easy Come, Easy Go!", a previous single, is also included on the album.
Posted by J-Canuck at 2:22 PM