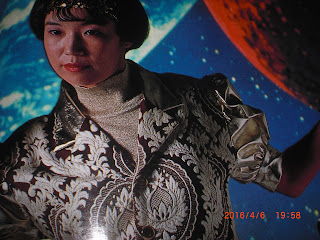 One of the more interestingly titled Yumi Matsutoya（松任谷由実）songs that I've ever encountered, I kinda wondered what the deal was with "Harujoon/Himejoon".


The second track on Yuming's（ユーミン）5th original album "Benisuzume"（紅雀...Strawberry Finch） from March 1978 and her 10th single from that same month, it's got a lot of that exotic kayo atmosphere so I can compare it with a few of those songs which were popular for that feeling of overseas travel such as Judy Ongg's（ジュディ・オング）"Miserarete"（魅せられて）and Saki Kubota's（久保田早紀）"Ihojin"（異邦人）. Therefore, I was left wondering whether that unusual title was referring to a certain language's deep expressions or actual locations in another country.

As it turns out, it was neither. Actually, those two words refer to a couple of species of daisy of which only one is even mentioned in Yuming's lyrics. In English, those daisies are scientifically named Erigeron Philadelphicus and Erigeron Annuus. Speaking of those lyrics, my image is that a lady has returned to her hometown to give a final goodbye to a loved one who has unfortunately left this mortal coil far too soon, and realizing that although the town has remained the same, she hasn't. I guess that it might be like the expression "You can't go home again", and the melody has that certain melancholy feeling.

The single didn't do all that well on Oricon, only getting as high as No. 80, although the album "Benisuzume" peaked at No. 2 and finished the year as the 25th-ranked album. Still I'm pretty certain that "Harujoon/Himejoon" has gained in favour among Yuming fans considering that it's been placed on her concert playlists, and also it plays quite well in my head.


I don't know when Keiko Terada（寺田恵子）from the rock band SHOW-YA did her slightly more urban contemporary pop cover of "Harujoon/Himejoon", but according to the video below, it looks like Terada did a one-shot of this song that she has always loved. Perhaps, though she may have included it as a track in one of her albums.