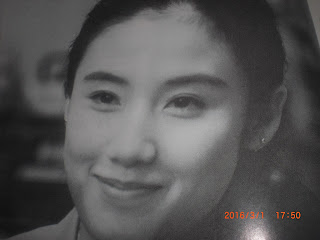 The last time I wrote about singer/actress Tomoyo Harada（原田知世）, it was back in April when I put up an article about one of her very early aidoru-era singles, "Tokimeki no Accident"（ときめきのアクシデント）.

Tonight, however, this is for her latest single, her 31st, which came out in July 2019, "Kotoba Dori" (Word Birds) which happily expresses the power and flight of words. Written and composed by singer-songwriter Ryuichiro Akamatsu（赤松隆一郎）, it's a cheerful and soaring tune with a whole bunch of instruments getting together for a light jam session including a piano solo and fun and relentless jazzy drumming. Harada's soft vocals can even be said to be leading the whole bunch as they fly over the Earth. I guess bird really is the word here.

"Kotoba Dori" also became part of NHK's "Minna no Uta"（みんなのうた）series for children and it was watching the video on TV less than an hour ago that I decided to write about the song although I've seen it a number of times. The video above though seems to be the one that had originally been done for "Kotoba Dori" as opposed to the one created for the NHK show.
Posted by J-Canuck at 7:44 PM