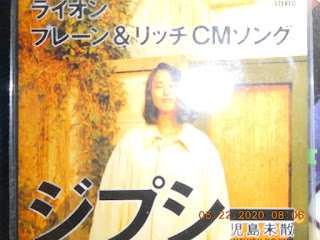 Another singer that I haven't covered in a while is Michiru Kojima（児島未散）. Just judging from the very first song that I heard from her, "Gypsy"（ジプシー）back in 1990, I simply treated her as a performer of moody pop numbers. It wouldn't be much later that I realized that she did have a past performing some pretty snappy urban contemporary fare.

My feeling is that I really should grab Kojima's 1989 album "Key of Dreams" if it's still available and not piled up on the dreaded hill of haiban. For one thing, the title track is a smooth-as-glass City Pop song for the late 1980s with all of that sophisticated pop goodness. You can listen to it again here as the above video is for the full album and the song "Key of Dreams" starts things off.

Right after that one, though, is "Namaiki CINQ" (The Audacious Five) which seems to refer to what any young lady of Tokyo needs for the good life, I believe. I heard things like luxury, a diary, and a history as some of those ingredients but not quite sure since I couldn't find the lyrics online. There's more of an active beat with "Namaiki CINQ" compared to the slightly mellower "Key of Dreams" as if Kojima is prepping for a night out on the town, and even the synths provide some semblance of jazzy instrumentation.

As with "Key of Dreams", Yumi Yoshimoto（吉元由美）is the lyricist with "Namaiki CINQ" while Etsuko Yamakawa（山川恵津子）, who arranged that title track, is fully behind the melody for the second track on the album.
Posted by J-Canuck at 3:45 PM