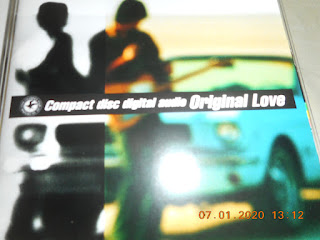 One of the earliest songs that I wrote about on the blog was Original Love's "Asahi no Ataru Michi" （朝日のあたる道）, the band's 6th single from April 1994. As I mentioned in that article, it was my first exposure to Takao Tajima（田島貴男）when he still had a number of people with him under the Original Love name, and I heard it in my friend's car one rainy day. "Asahi no Ataru Michi" was this blend of fun pop, soul and jazz that struck me as being quite different from what was hot during those times in music when the Komuro Boom was beginning its steamroller run and while guitar pop/rock bands such as Mr. Children and Spitz held sway.

Well, it didn't take long until I copied my friend and bought the album that had "Asahi no Ataru Michi", "Kaze no Uta wo Kike" (Hear the Song of the Wind), Original Love's 4th album released in June 1994. According to J-Wiki, it hit No. 1 and ended up as the 63rd-ranked album of the year. But for all that, I played the whole album on my Onkyo in my apartment in Ichikawa...and then put it into my shelf of compact discs for several years without playing it again. I gave the same indifferent treatment to Taeko Ohnuki's（大貫妙子）"History 1978-1984", and the reason was the same: as I would find out many years later, it wasn't at all the fact that the songs were bad; I myself was simply not quite ready to embrace either Original Love or Ohnuki because they both dared to provide songs which went in all sorts of directions. 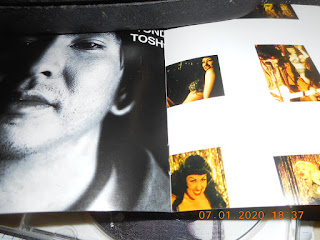 I'm definitely much older and a little wiser now as I appreciate both albums. With "Kaze no Uta wo Kike", there is a lot to chew on in terms of what vocalist and songwriter Tajima provided here. And here I start with Track 1, "The Rover".

Now when it comes to remembering anything called Rover, I'm someone who's very much in the minority since it's not a name of a dog that comes to my mind first. For me, Rover means that terrifying gigantic white balloon/enforcer from the 1960s British thriller series "The Prisoner". Rover scared me into the crack between sofa cushions when I saw it capture errant Villagers, and I think it actually got a shoutout in the final episode for Season 2 of "Kaguya-sama: Love is War" last weekend.

Ahhh, but now, I can sleep more soundly now that Rover can refer to "The Rover" by Original Love. Written and composed by Tajima (unless noted otherwise, all tracks have been handled by Tajima), the music video for this first track sure shows one heck of a crazy road trip accompanied by just-as-crazy film footage. I'm sure hoping that at least the driver didn't have any illicit chemical compounds in his system, but the video goes back-and-forth between frolicking in the desert and then whooping it up in some go-go dance club from the 1960s. I had been wondering what the deal was with those photos in the album's cover booklet...and it turned out to be colour shots of the dancers.

There's some good ol' James Brown-like funkin' going on with Tajima and the gang, and apparently according to the description of the song by Tajima in the J-Wiki article, "The Rover" was based on a re-arrangement of an earlier song "Ai no Circuit"（愛のサーキット...Love Circuit） from Original Love's 1992 album "Kesshou"（結晶...Crystal） and a whole lot of experimentation. It certainly sounds like the band enjoyed going into this song like me going through a tenderloin steak. Incidentally, the lovely Yuiko Tsubokura（坪倉唯子）provides backing vocals on a number of the tracks including this one.


Unfortunately, I couldn't find the actual track from "Kaze no Uta wo Kike", but "Jisa wo Kakeru Omoi"（時差を駆ける想い...Memories Running Through the Time Difference）, which is being performed here on Tajima's "Hitori Soul Show" (Soul Show by One) released in June 2012, is the one other song besides "Asahi no Ataru Michi" that I remembered even after that first listening to the album. I believe one reason is the bossa nova in the melody devised by Tajima and bassist Hideyuki Komatsu（小松秀行）, and although I hadn't realized it at the time, I was always quite attracted to the genre. There is something so very romantic and sweeping about "Jisa wo Kakeru Omoi", and yet according to Tajima, the lyrics are all just based on his childhood memories of running around with buddies and smelling that wonderful soup before dinnertime. Those memories came flooding back to him as he was on a plane either heading over to or coming back from Morocco in 1993 for filming. 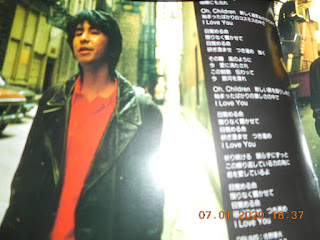 There's some more of that home movie camera style for the video (taken down unfortunately) of "It's A Wonderful World", and according to Tajima, the song was inspired by the works of Curtis Mayfield. Tajima also remarked that it was the first time that he had ever sung an entire song in the higher registers of his voice so he had been a tad worried about how it would go at recording, but as it turned out, he did it in one take. Some fine 70s New York funk and soul included here.


"Futatsu no Te no You ni"（二つの手のように...Like Two Hands） sounds like the perfect summer love song as created by Tajima and keyboardist Ryutaro Kihara（木原龍太郎）. All it needs is a park to stroll in. Love the harmonies between Tajima and the rest of the band as well as the horns. The singer stated that he realized that there were at least some spiritual similarities between the song and Yumi Arai's（荒井由実）"Kitto Ieru"（きっと言える）, so perhaps this would be the New Music entry of the album?


One more track that I will provide here is "Fiesta"（フィエスタ）. Now throughout the years of writing in "Kayo Kyoku Plus", I've been able to gain names for some of the famous musical riffs that I've heard over and over again from various sources including The Doobie Bounce and Steely Dan's Mu Chord. Recently, I found out about The Bo Diddley Beat from TV Tropes, and it's been a rock n' roll rhythm that I've also heard in a number of songs such as George Michael's "Faith" and "I Want Candy" by Bow Wow Wow as mentioned in the TV Tropes article.

It looks like I'm hearing that now in "Fiesta" and just from the happy raucous music, my initial impression was that Tajima was channeling some wonderful experience down in New Orleans or somewhere in the Deep South of the United States. However, Tajima in the J-Wiki article for the album has remarked that he was using a Second Line rhythm; the remark has a direct link to the J-Wiki and then the English Wikipedia article on the Second Line tradition of people following a parading band with their own dancing and walking. He also said that he had initially wanted to create something that was comforting in the form of a hymn. Perhaps the end result didn't come out as a hymn, but personally speaking from what little I know of funeral traditions in New Orleans, "Fiesta" is still quite comforting since I assume that the funeral procession down there is one of some celebration and joy over the life that was lived by the person.

Finally, Tajima states that "Fiesta" may be the one track on "Kaze no Uta wo Kike" to reflect what the album is all about. If that is indeed the case, then I think the vocalist was trying to illustrate the celebration and joy of music in general through different modes. Why keep the music chained to one style in one album when there are so many other styles to explore and have fun with? Be free! 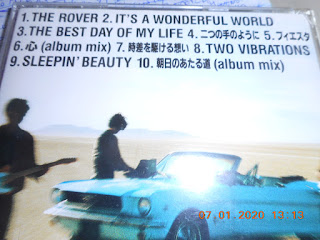