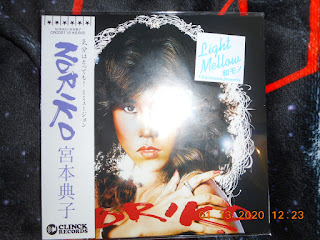 When it comes to soulful female vocalists from the era of City Pop, I can easily identify them as Kimiko Kasai（笠井紀美子）and Noriko Miyamoto（宮本典子）. So I gather that it's no surprise that the two songstresses have performed the same song on their own albums.


That song is "Yarikake no Jinsei" (A Life in Progress), and Kasai was the first to record it onto her 1977 album "Tokyo Special". It's a dreamy ballad that has that 1970s City Pop Haze effect from the keyboards, and with that saxophone accompanying Kasai's silky vocals, I couldn't help but feel that the city that's been channeled here is New York City with the singer herself looking out at the Big Apple from the top of a brownstone. There's something quite dusky about the arrangement as well.


Jazz bassist Isao Suzuki（鈴木勲）was behind the melody for "Yarikake no Jinsei" while Kazumi Yasui（安井かずみ）came up with the lyrics. Suzuki was also responsible for collaborating with Miyamoto for her 1978 single "Push" for which her cover of "Yarikake no Jinsei" was the B-side. Given an additional English title, "My Life" (and English lyrics for Miyamoto), the cover is just slightly more upbeat, maybe a bit more disco, with Suzuki's bass taking over for that saxophonist from the Kasai original. Otherwise, the arrangement is pretty much the same in my estimation although overall with Miyamoto's take, the feeling is more striding downtown than contemplating life on that brownstone.
Posted by J-Canuck at 4:24 PM