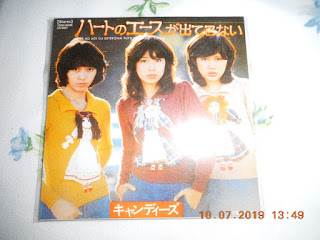 We're not quite yet at midsummer but watching last night's "Uta Kon"（うたコン）, there was that light theme of summery songs and then I also thought about the Ochuugen（御中元）season which represents the time of summer gift-giving in Japan. Whenever I entered a supermarket or department store anywhere there during the hot season, I would always see these huge boxes of anything food-related ranging from coffee to meat being sold. I myself never partook in the tradition since I saw Ochuugen as basically being a corporate way of thanking clients for their continued patronage. Mind you, I was tempted to purchase one of those boxes of AGF Coffee or Nippon Ham for myself.


In any case, one of the summer songs that got featured through old footage on last night's "Uta Kon" was "Shochū Omimai Mōshiagemasu" (Midsummer Greetings). This was Candies'（キャンディーズ）14th single from June 1977 that I had never heard before last night. Written by Makoto Kitajo（喜多條忠）and composed by Juichi Sase（佐瀬寿一）, the trio sing about going over to meet the beloved beau during summer for all sorts of romance under the hot sun. The arrangement was handled by Koji Makaino（馬飼野康二）.


The nostalgia is strong with this one with its Candies-esque arrangement. But one thing that I have to say is that some of that pounding piano reminded me of Elton John's "Crocodile Rock" for some reason. "Shochū Omimai Mōshiagemasu" peaked at No. 5 and became the 39th-ranked single of the year, selling around 320,000 records according to the J-Wiki article for the song. It is also a track on Candies' 9th album "Candy Label" which was released in September 1977. Not surprisingly, "Shochū Omimai Mōshiagemasu" was also used as the campaign tune for a Japan Post commercial for summer greeting postcards.

Another point about the song is that during its rise into the Top 10, Candies held a concert in July that year at the Hibiya Open-Air Concert Hall in Tokyo where they blurted out their intention to disband. Man, I hope that the ladies' manager and other staff were in on the announcement beforehand. Sure enough, eight months later, Candies had their final roundup in April 1978.


There have been a number of covers of "Shochū Omimai Mōshiagemasu" over the years including the one performed by Hello Project's ℃-ute as their 9th single in July 2009. Aside from a bit of synthesizer updating, the arrangement is pretty much the same, and even ℃-ute is performing in very similar outfits to the ones worn originally by Candies.

Because we're on the summer kick right now, after watching "Uta Kon" last night, I'd wondered about doing a list of summer songs, especially on seeing Misato Watanabe（渡辺美里）perform her classic "Summertime Blues". However, my mind must have gone a bit swoony from the heat since I'd already provided Part 1 and Part 2 of such a list almost a couple of years ago. Please peruse those if you wish.
Posted by J-Canuck at 3:46 PM