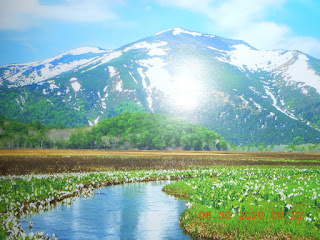 Happy Sunday! Or I hope that everyone is having a Happy Sunday in the immediate vicinity since not every person is a big fan of heat and humidity. Like me. Today will probably end up being one of the hottest days of this summer, and so I've got my electric fan on behind me.


Perhaps I can try for some aural cooling down with this October 1969 song by kayo veteran Chiyo Okumura（奥村チヨ）. This was actually the B-side to her "Koi Dorobou"（恋泥棒...Love Thief）, "Kitaguni no Haru wa Mijikai" (Springs in the Northern Country are So Short), and from the slightly anguished vocals by Okumura and the title, I can surmise a bit that the ballad is a melancholy one about love lost so early in the year, far from the traditional breakup season of fall.

My previous article about Okumura last September was about the similarly titled "Kitaguni no Aoi Sora"（北国の青い空...Hokkaido Skies） composed by The Ventures in 1967, and I had to listen to that one and "Kitaguni no Haru wa Mijikai" a number of times in alternating succession since they also both sounded quite similar. But for this B-side, it was Rei Nakanishi（なかにし礼）on lyrics with Kunihiko Suzuki（鈴木邦彦）taking care of the music. As is the case with "Kitaguni no Aoi Sora", there is something faintly enka-like with "Kitaguni no Haru wa Mijikai" but in the end, I think this is also a straight-up pop kayo.
Posted by J-Canuck at 11:51 AM