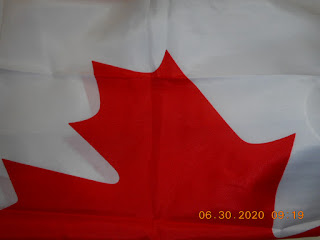 Welcome to July 1st and Canada Day! Our nation is celebrating its 153rd birthday today and though there will be no fireworks displays or parades this year, hopefully everyone in Canada is having a safe and happy day today.


As has been the case each year in tribute to the Maple Leaf, I've been trying to find a kayo or J-Pop song that would actually at least have Canada in the title. This has been a tradition of sorts since I first put up that old karaoke-friendly chestnut "Canada kara no Tegami"（カナダからの手紙）all the way back in KKP's inaugural year of 2012.

Furthermore, I've heard of jazz singer Yasuko Agawa（阿川泰子）for years and was aware that she had even contributed songs in the City Pop/AOR genre early in her career, but it was always one thing or another that I never got around to putting any of her tunes onto the blog. Well, I'm killing two (snow)birds with one stone (from the Canadian Shield) on this Canada Day and putting up the first Agawa article with "Canadian Star".

"Canadian Star" is a track on her 1983 album "Night Line" and it's a nice way for me to start the Agawa file because I find it a soothing City Pop/AOR lullaby of sorts. The lady in the lyrics (provided by Ralph McCarthy) seems to be in some hotel in the Great White North writing a letter (not quite sure if there were some inspiration from "Canada kara no Tegami"...ha, ha) to that mystery man of love who swept her off her feet and then swept on out. I wouldn't be surprised if she were penning the letter in the middle of the night as her light is the only one on in the entire hotel.


I found out that Agawa's "Canadian Star" was a cover of an original instrumental track recorded by fusion group Dr. Strut for their 1979 self-titled album. Apparently, the band was once called The Legendary Groovadelics but when they joined up with Motown Records, Berry Gordy insisted that they change the name; perhaps not a bad idea.

Anyways, the big surprise actually happened earlier in my check on this song. Last night, when I wanted to find out who had been responsible for words and music, I did my usual due diligence at the JASRAC database and saw a name: BECKER WALTER CARL. Hm...OK, looks like an application for car insurance, I thought, but the name did ring with some familiarity. Then I looked further and saw the name: FAGEN DONALD JAY.

Wait a metric minute here! Steely Dan composed this tune?! The answer is an absolute yes. The band that provided plenty of inspiration and chords to City Pop artists in the late 70s and early 80s was indeed behind the composition of "Canadian Star" for Dr. Strut. And the interesting thing is that it doesn't really sound like the prototypical Steely Dan song to me, although even more devoted fans can probably indicate a tune of theirs that might illustrate a similar arrangement. In fact, when I heard Agawa's cover for the first time, I thought that there was something more Eagles' "Desperado" to it.


As for Agawa, her real name is Yasuko Sato（佐藤康子）and she hails from Kamakura City in Kanagawa Prefecture. According to a June 1981 issue of the journal "Shukan Asahi"（週刊朝日）via J-Wiki, she's also been given nicknames such as Sugar Voice, The Idol for the Necktie Crowd and The Idol for the Old Guys (not quite sure if that last one is particularly complimentary). She made her start in show business in the early 1970s and was also an actress at one point, appearing in movies and TV shows such as "Ultraman Leo"（ウルトラマンレオ）as an alien and the famous cop show "Taiyo ni Hoero!"（太陽にほえろ！）. The singing part of her career began in 1973 when she was introduced to jazz clarinetist Shoji Suzuki（鈴木章治）and then became part of his band Shoji Suzuki & The Rhythm Aces（鈴木章治とリズム・エース）. However, as I said up above, she did have her dabble in City Pop, and I would like to have a listen to her "L.A. Night".

To finally put a bow tie on this article, it's interesting to note that there is a famous train tour in the northern part of my province Ontario, and the region is actually called Agawa Canyon.
Posted by J-Canuck at 1:32 PM