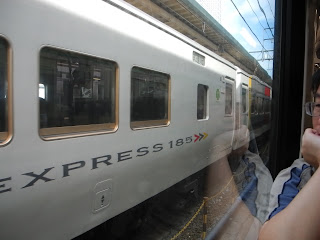 A couple of days ago, I wrote about Candies'（キャンディーズ） "Ginga Kuko"（銀河空港）which related the end of a relationship via an airport. Of course, airports have been the setting for many a kayo about the sweet (or not) sorrowful breakup.


But perhaps even earlier and still now, the train platform can be that other transportation hub of sadness. One example of such a kayo is "Yoru no Platform" (Night Platform) as sung by Akiko Futaba（二葉あき子）. I wrote about her late last year in her first article "Niizuma Kagami"（新妻鏡）.

Although that musical tribute to the industrious train horn is never too far away, Futaba gives that mournful performance of love lost (with perhaps a little hope that her beloved may return), and the arrangement of strings behind her reminded me of a lot of songs that I used to hear in movies that I've seen on Turner Movie Classics. The ballad with that soupcon of Latin was a huge hit for Futaba when it was released in 1947 and is seen as one of her trademark songs.


Reading the article for the actual song on J-Wiki, "Yoru no Platform" had actually been recorded originally in 1939 by singer Noriko Awaya（淡谷のり子）as a song for the movie "Tokyo no Josei"（東京の女性...Woman of Tokyo） starring Setsuko Hara（原節子）. However the sad lyrics of departure were seen as too disruptive during a time when young men were being sent off to war, and Awaya's version was quietly shelved although she recorded and performed the song years later.


Ryoichi Hattori（服部良一）was behind the melody while Yashio Okuno（奥野椰子夫）wrote the lyrics. In 1941, an English version, under the title of "I Will Be Waiting", was recorded with Hattori's name changed to R. Hatter while a fellow named Vic Maxwell provided the English words and even sang the song.
Posted by J-Canuck at 7:53 PM