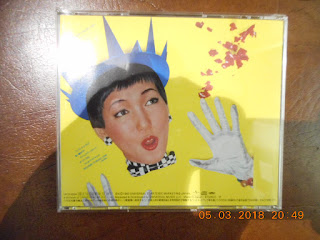 When I heard Junko Ohashi's（大橋純子）"Kousui" (Perfume), a certain insertion of a synth in the intro had me thinking whether the City Pop chanteuse was going YMO technopop, but it was just an embellishment as the song and her vocals got back onto the genre that she's been most well-known for.

"Kousui" is a track on Ohashi's 1982 album "Tasogare"（黄昏...Twilight）. Unfortunately, I couldn't find out who wrote or composed this fairly racing tune, but I like to think that this lack of information will give me some impetus in picking the album up to sate my curiosity. In any case, it's another Ohashi song of the city with her wonderful voice and an arrangement that brings to mind a woman making a mad dash in full makeup and fashion so that her date is not kept unduly waiting at that hotel top bar. Gotta make sure that the perfume is right, too.
Posted by J-Canuck at 3:04 PM