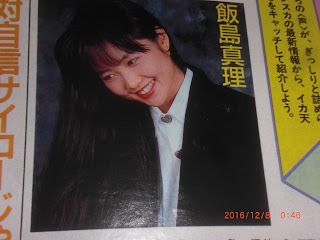 Not quite an earworm as her "Cecile no Amagasa"（セシールの雨傘）, I still took a bit of a shine to Mari Iijima's（飯島真理）song from her 2nd album "Blanche" (1984).


"Aenai Toki mo" (Even When We Can't See Each Other) may have some funkiness to it, but it's so light that I can only hear it as a straight pop song. Written and composed by Iijima, the arrangement is by Minako Yoshida（吉田美奈子）, and I can definitely hear her in the backup chorus but that's about as R&B as it gets. In fact, in one part, things get downright dreamy, and the song ends with a trombone having its way in the coda along with an old-fashioned rotary phone. It's not exactly going to end up in my Top 5 Mari songs but "Aenai Toki mo" might sound pretty good in the earbuds as you're on the plane getting ready for takeoff on the tarmac.
Posted by J-Canuck at 7:47 PM