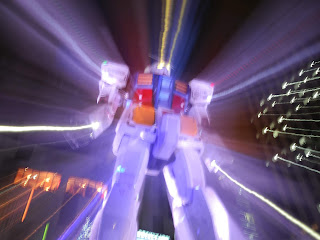 Happy Monday! Did the usual anime-and-food gathering yesterday. We saw the usual half-hour treats but the feature film before dinner was 2018's "MAQUIA: When The Promised Flower Blooms", otherwise known in its original Japanese as 「さよならの朝に約束の花をかざろう...Sayonara no Asa ni Yakusoku wo Kazarou」. It's a decades-spanning melodramatic fantasy film that was really sad and uplifting at the same time. Let's say that I did my fair share of "peeling onions" especially near the end, and I recommend this for Mother's Day viewing. Was very glad that we got to see somewhat lighter and happier fare after dinner, though.


Anyways before "MAQUIA", there was the usual anison hour, and I got to hear this theme song once again although I kept forgetting to highlight this one in the blog up until now. I kinda wonder why since it is such a cool-sounding tune.

This would be "Honoo no Sadame" (Destiny of Fire) by TETSU as the opening theme for the 1980s mecha anime "Sōkō Kihei VOTOMS"（装甲騎兵ボトムズ...Armored Trooper VOTOMS）. Never saw the show although I've heard the title enough times over the decades. Do love the horns and bass in there providing some funk n' groove to a show about a soldier and his armour on the run.


I was also curious about this TETSU fellow, and it turns out that he would later become involved in songwriting for TUBE and pop-rocker Nanase Aikawa（相川七瀬）, and be responsible for creating the melody for the most successful single of 1990. Indeed, I am talking about composer Tetsuro Oda（織田哲郎）but back in 1983, I think he was just doing his own singing.

He is behind the mike here while "VOTOMS" creator Ryosuke Takahashi（高橋良輔）provided the lyrics and Hiroki Inui（乾裕樹）composed and arranged the melody. There is something quite epic, soaring and gritty about "Honoo no Sadame" which nicely matches the overall plot of the show.

You can also take a look at the more introspective ending theme, "Itsumo Anata ga"（いつもあなたが）.
Posted by J-Canuck at 2:29 PM