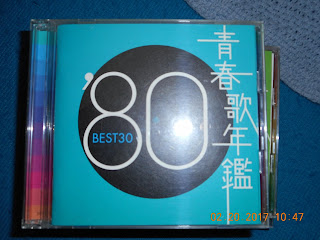 With those dramatic violins and slightly melancholy melody paired with some disco flavourings, I think the following is an interesting fusion of aidoru styles between the 1970s and 1980s.


For that reason above, "Yesterday's Melody" may be quite a well-titled track on Chika Takami's（高見知佳）3rd album "Mitsu no Aji ~ A Taste of 3rd"（蜜の味...A Taste of Honey）from August 1980. The arrangement of those strings had me thinking of both late 70s Hiromi Iwasaki（岩崎宏美）and early 80s Akina Nakamori（中森明菜）while that pensive music reminded me of some of those aidoru ballads from the early part of that latter decade. Of course, the disco part (including stuff that got me thinking about Rod Stewart) was rather smack-on for 1980.

Machiko Ryu（竜真知子）provided the lyrics while Koji Makaino（馬飼野康二）came up with the music and arrangement. Considering the meaning of the title, maybe Takami's choice of colour for her short-sleeved shirt was quite appropriate in an apian sense.🐝 "Mitsu no Aji" may not have given the singer the breakthrough she desired but all she needed to do was wait around a few more years.
Posted by J-Canuck at 8:44 PM