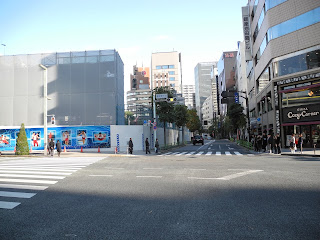 One of my first experiences having dessert in Tokyo was at a branch of the Cozy Corner franchise. Although I don't think that I have ever seen one of those sweet shops in the suburbs or bedroom towns of which my Ichikawa was one, Cozy Corner is pretty much everywhere in the main city (for example, there is one of the Ginza shops as you can see at the right of the above photo).

I remember being in a Cozy Corner with friends for the first time after landing in Japan to start my second stint as an English conversation teacher at NOVA. Let me say, first of all, the sizes of cakes vary greatly in Canada and in Japan. Without too much exaggeration, I was accustomed to getting a dangerously large wedge of Black Forest or Strawberry Shortcake which could easily be 1/5 or even 1/4 of a whole. However, when I got my first slice of Strawberry Shortcake at that Cozy Corner, I took a look at it and remarked "Do I eat this or do I inhale it?". Let's say that it was rather petite. However, as the years went by during my life in the Kanto, me and my stomach not only became accustomed to the massing down of cake but by the end, we actually were quite happy for the downshift.

Also, I gather that depending on where a Cozy Corner is located, the clientele can be quite different. My friend and I were sitting in one branch deep in Ginza having our cake and coffee, and we just noticed a lot of very high-class women varying in age between 20 and 40 all around us, knocking back the joe and taking drags on their cigarettes. I would say that approachability was effectively zero. Good cake, though.


On that note, I wanted to introduce a perfectly Mood Kayo tune right from the title itself, "Ginza Blues". A love letter of sorts to one of the world's most expensive neighbourhoods, this apparently has been quite the favourite for singers of the genre over the years. Written by Takeshi Sagara*（相良武）and composed by Domei Suzuki（鈴木道明）, the first recording of this was by the perennial Mood Kayo combination of Kazuko Matsuo & Hiroshi Wada and Mahina Stars（松尾和子・和田弘とマヒナスターズ）back in May 1966. The above performance video also included crooner Frank Nagai（フランク永井）. I don't know what the original recording sounded like but if it's anything like the stage performance, then the Mahina Stars' original had some of the Hawaiian part of the genre. Everyone here also got together to record "Dare Yori mo Kimi wo Aisu"（誰よりも君を愛す）several years previously.

Unfortunately, I couldn't find out when this recorded duet between Nagai and Matsuo was released, but considering their "Tokyo Nightclub"（東京ナイトクラブ）from 1959, these two just had to get back together to do "Ginza Blues". This version keeps the Mood Kayo flavour of course but this time, it veers a bit more toward the jazzy side if that clarinet is any indication. Jazzy and classy.


And of course, The Tough Guy had to get in on some of that "Ginza Blues" action, too. Once again, this was one of those recordings that I couldn't track down a date, but from the sound of Yujiro Ishihara's（石原裕次郎）voice, his cover may have been come from the late 1960s or 1970s. Finding out about all these different covers of this song, I've come to realize that despite all of them being in the same genre of Mood Kayo, they can each have their own individual arrangement. In Ishihara's case, there is quite the nightclub feeling, thanks to that boozy sax and the caressing/echoing vocals by The Tough Guy. The tumbler of Old Parr is on its way!


Last but certainly not least, there is Sachiko Nishida's（西田佐知子）cover of "Ginza Blues". This time, according to the notes for the YouTube video, I was able to find out that her version was a part of her 1969 album "Koi wo Utau"（恋を唄う...Sing of Love）. Plus, her vocals lend a refreshing and "the night is still young" lightness to the proceedings, as if the setting were a pre-dinner visit to a bar instead of the after-dinner nightclub. The songwriter Domei Suzuki had also provided Nishida with another Mood Kayo classic, the 1965 "Akasaka no Yoru wa Fukete"（赤坂の夜は更けて）, a tribute to another swinging area of Tokyo nightlife.

Because of money and the fact that I remain a very light drinker, I never really imposed myself into bar culture anywhere in Tokyo including Ginza and Akasaka, but at least, there were still a number of good cafes to inhabit, including Cozy Corner. Still appreciate the cakes there.

*The lyricist's name has a number of readings for both family and first names so I've taken a wild guess here. If someone knows the correct reading for him, please let me know. Also, Akira Kurosawa & Los Primos（黒沢明とロス・プリモス）have also given their contribution to this song.
Posted by J-Canuck at 8:50 PM