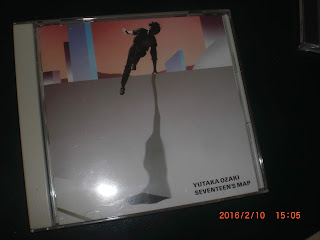 Yesterday morning, while I was watching NHK's "News at 9", there was a report about the piano of the late songwriting balladeer, Yutaka Ozaki（尾崎豊）, being donated to the Toyama Art Creation Center in Toyama City.


Seeing that we're approaching the 27th anniversary of Ozaki's untimely passing (April 25th 1992), I've decided that the second "Kayo Kyoku Plus" entry for March 2019 would be one of his songs.

And so I found his 7th single from June 1988, "Taiyo no Hahen" (Scratch of the Sun). Now, when it comes to Ozaki, although I know from listening to his 1983 album "Seventeen's Map" that he's done upbeat fare, my usual impression of his music is that of an often anguished protagonist trying to fight against a lot of existential demons that perhaps has claimed those who were once close to him in the battle. "Taiyo no Hahen" seems to be one of the representative examples.

First off, I've started to become entranced by the melody in this song that begins almost like an old kayo before quickly transforming into this seemingly sunset downtown bluesy ballad. Saxophonist and arranger Toshiyuki Honda（本多俊之）really brings a lot of urban and romantic flavour into "Taiyo no Hahen" as Ozaki can be imagined to be on top of a building, desperately beseeching the powers-that-be and the woman that he probably wronged for a second chance. The way his lyrics look, the poor guy has been going absolute withdrawal since his problems began. The titular scratches of the sun are the ones reflected in the tears running down his cheeks.

Being nearly 31 years old, "Taiyo no Hahen" will of course have a nostalgic ring, but for me, the nostalgia goes back even a bit more since especially the coda sounds a bit like "Nobody Does It Better", the July 1977 hit by Carly Simon.

The ballad went Platinum as it peaked at No. 3 on Oricon. It's also gotten further special status in that until relatively recently, the song was only available as a single for many years. It never got onto an original album. However, in 2008, "Taiyo no Hahen" made it onto "WEDNESDAY 〜LOVE SONG BEST OF YUTAKA OZAKI", a BEST compilation that got as high as No. 28 on the charts. Perhaps this album will be on my "Get" list in the months to come.