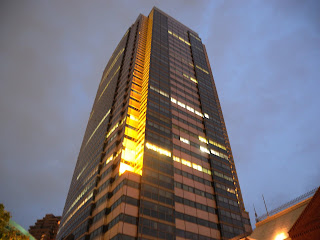 A topic that came up in conversation today was my oft-remarked analogy of my discovery of Japanese music via the iceberg in the ocean with the exposed one-tenth representing the Oricon hits and songs that pop up on the TV shows and commercials. The submerged nine-tenths contain a lot of those hidden goodies made by singers that never quite hit superstardom.

One case in point is jazz singer Kei Hoshino（星乃けい）who used to sing under the name of Yoko Nishigori（西郡よう子）a few decades ago. I would never have known about her if it hadn't been for "Kayo Kyoku Plus" and my subsequent browsings through YouTube. She already has a few songs on the blog which means that she's been alright by me.

In fact, I would now love to get her debut album "My Name is YOKO" from 1980 since it starts off with the urban mellow "Samidare" (May Rain). The uploader for the album on YouTube identified it as "Go-gatsu Ame", and at the JASRAC database, it's been titled the aforementioned "Samidare" and "Satsuki Ame". All three sayings are fine but I distinctly heard "Samidare" in Nishigori's lyrics so I will go with that.

Anyways, Nishigori was also responsible for the music which strikes me as the appealing closer-to-home, definitely established-in-Japan type of City Pop. There is that really soft keyboard and the wailing guitar that remind me of the works of Akira Terao（寺尾聡）on his "Reflections" album. Day or night, "Samidare" works well and as I said, I would like to get my hands on "My Name is YOKO" because of it. The album also has a couple of songs that I've already covered, "Futari"（二人）and "Kono Ai ni Ikite"（この愛に生きて）.
Posted by J-Canuck at 8:39 PM