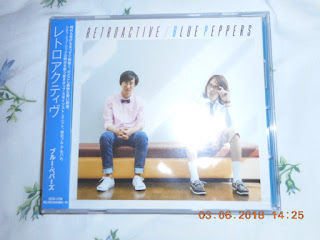 Once again, we're on the cusp of a weekend, so to finish off my articles for Friday, perhaps I can do so with something AOR or City Pop.


Happy that I can include another song by light and mellow Blue Peppers（ブルー・ペパーズ）from their 2017 album "Retroactive". This is "Futari no Mirai" (A Future for Us) with the lovely voice of Shiori Sasaki（佐々木詩織）gracing the notes once again.

Written and composed by Blue Pepper Kaoru Inoue（井上薫）, along with the 21st-century J-AOR feeling, I also think that there is a nice overlay of sunny Shibuya-kei, just judging from the arrangement. I get this impression that Inoue may have been going for some sort of tune which would have been ideal as a theme song for some breezy rom-com from the 1960s. Certainly Inoue's lyrics of one-half of a relationship reassuring the other that no matter the problem, they can overcome it together kinda hint at something along the lines of a Redford/Fonda flick. In any case, it's just the jazzy tonic to get us into the weekend...without the hangover.
Posted by J-Canuck at 10:10 PM