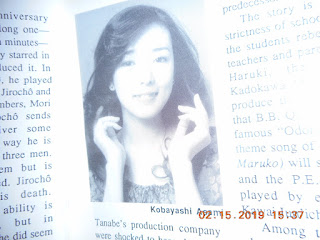 Happy Saturday! Commenter Matt contacted me about an Asami Kobayashi（小林麻美）song that he's been rather fond of.


As I may have mentioned in past articles about her, Kobayashi's 80s material at least has often invoked images of her lying down on a chaise lounge as she quietly requests for a single grape (a bunch would be too gauche). There is that feeling of sweet ennui surrounding her.

"Sugar Shuffle" is another one of those songs that gets those ideas into my head. Kobayashi doesn't so much sing the song as she coos it like sweet nothings into an ear. Plus, the arrangement is such that it doesn't really need much tweaking to become a Vaporwave/Future Funk masterpiece. It's quite airy, like the lightest souffle.


Kobayashi's version is a cover of the original "Sugar Shuffle" by British singer-songwriter Lynsey De Paul and Barry Blue. The song was a track on De Paul's 1975 album "Love Bomb". Meanwhile, Kobayashi's take is available on her 1984 album "Cryptograph" with her and Yumi Matsutoya（松任谷由実） providing the Japanese lyrics.

If you want to get into that ennui sort of mood, listen to "Sugar Shuffle" while ingesting something sweet. But eat it one at a time.😋
Posted by J-Canuck at 11:56 AM