Pizzicato Five -- On Her Majesty's Request（女王陛下のピチカート・ファイヴ） 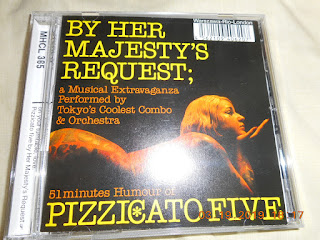 Unless you're a longtime Pizzicato Five（ピチカート・ファイヴ）fan, you may be inclined to point at me and giggle like Beavis and Butthead. "Hey, look! J got his preposition wrong...and he's an English teacher and translator!"

Well, not quite. I hadn't realized it until I read the J-Wiki article on P5's 3rd original album from July 1989, "On Her Majesty's Request", but what I actually got from Tower Records over the Holidays was the 1995 slightly shorter version of that album (omitting two tracks) named "By Her Majesty's Request". Oh, dopey me! Prepositional hazard! However, since I will be writing about those two missing tracks here that had been on the original release, I'm keeping with the "On". 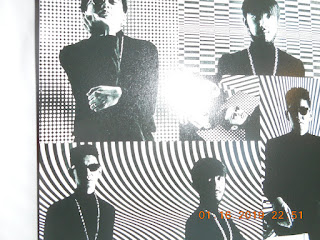 Anyways, I bought "By Her Majesty's Request" which is known in Japanese as "Jouou Heika no Pizzicato Five" (Her Majesty's Pizzicato Five) through a strong recommendation from one of the commenters. Already having some of the group's releases with the Divine Ms. Maki Nomiya（野宮真貴）from the 1990s when the genre of Shibuya-kei was in full flower such as "Romantique 96" (1995) and then their very first album, "couples" (1987) when Mamiko Sasaki（佐々木麻美子）was the vocalist, I didn't need my arm twisted to pick this one up. Moreover, "On Her Majesty's Request" came out right in the middle of Takao Tajima's（田島貴男）time behind the mike for P5, so I was really interested in hearing how he sounded as a member of this most eclectic group several years before Original Love came into being. I've already written about one of the tracks from the album, "Top Secrets", which basically sealed the deal that I would be providing cyberspace here for the entire thing.


Check the Amazon link to hear brief excerpts from the album.

Now, "On Her Majesty's Request" has been categorized on J-Wiki under a whole plethora of genres: rock, soul, jazz and pop, but NOT Shibuya-kei. I thought that a bit odd but then again, the term "Shibuya-kei" apparently didn't come into conventional usage until the final decade of the 20th century. Still, as soon as I heard the very first track "Audrey Hepburn no Kyuujitsu"（オードリィ・ヘプバーンの休日...Holiday for Audrey H.）, Shibuya-kei was all I could think of.

The whole concept behind "On Her Majesty's Request" was the soundtrack for the life and loves of a fictitious spy, but listening to Keitaro Takanami's（高浪慶太郎）"Audrey Hepburn no Kyuujitsu", it wasn't actually Bond, James Bond that I imagined. In fact, I kinda settled on Harry Palmer, the cynical operative played by Michael Caine for flicks such as "Billion Dollar Brain" back in 1967 and even Pierce Brosnan's Thomas Crown for the 1990s version of "The Thomas Crown Affair".  Right from note one, there was that frazzled razzle-dazzle of racing through the craziness of the city but there was also that really slow and cool trumpet by Shin Kazuhara（数原晋）trying to settle us down. Maybe the trumpet represented Palmer quietly whipping up a souffle or Crown relaxing in his armchair and concocting another heist in his head as easily as solving a crossword puzzle.

Track 3 "Shin Bellissima"（新ベリッシマ...Bellissima'90）is where we get to hear Tajima for the first time on the album. Classy and rowdy at the same time, it's almost like hearing a track that was created for both the martini-sipping and beer-swilling sets in the same bar. This was written and composed by Yasuharu Konishi（小西康陽）and it's got that rock mixed in with the Shibuya-kei as Tajima has that lighter voice when compared to his time as Original Love. Lyrically, it's all about that man (or cad) about town getting ready to give that goodbye to his soon-to-be former girlfriend. Guitarist Hiroyuki Hanada（花田裕之）provides the solo.


"Lip Service"（リップ・サーヴィス）which was created by Tajima and Konishi is a sultry but also bubbly concoction featuring the former marveling at the wonders of a kiss. Nobuo Yagi（八木のぶ夫）provides the harmonica solo. Listening to this one, I get images of the original Thomas Crown (Steve McQueen) and Vicki Anderson (Faye Dunaway) getting into that lip-locking.


(Unfortunately, the video has been taken down.)

Boys, be ambitious indeed! Pizzicato Five was ambitious enough to provide an album within an album of sorts through their "Excerpts from the music for film 'EROTICA Operation'". One of my favourites among those excerpts was "Spy Tai Spy"（スパイ対スパイ...SPY vs SPY）which was also made by Tajima and Konishi, and as the title indicates, it's the P5 take on a swinging 60s spy caper with plenty of suspense and champagne and jazz, and even some narration by Konishi. Love the punctuating horns and timpani here!


One track that stands out is "Eisei Chuukei"（衛星中継...Satellite Hour）by Konishi and performed by Tajima and Maki Nomiya before she officially became the next and most famous vocalist for Pizzicato Five. It stands out since it diverges from that spy movie theme and takes on a rather cute and slightly technopop arrangement. Junko Sugimura（杉村純子）provides the voice sample here as Tajima and Nomiya sing about the joy of receiving telly from all over the planet. Strange connection here but this one has me remembering certain pages from the Marvel comic "Excalibur" (possible future movie in the MCEU?) in which adorable and innocent Meggan is lapping up all of the television she can while sucking back on a milkshake.

To finish off this article (and I'll probably have to come up with a follow-up article for "On Her Majesty's Request" in the near future), I'm going to provide the two omitted songs that I mentioned up top that made "On Her Majesty's Request" into "By Her Majesty's Request". One is actually the first excerpt from "EROTICA Operation", "Nairobi no Jouou Heika"（ナイロビの女王陛下...The African Queen）by Konishi which is this rumbling tropical instrumental propelled by the percussion and the great sax by the late Jake H. Concepcion. I will now have those Mai Tais at Trader Vic's please!

The second song that got omitted from the 1995 "By Her Majesty's Request" was the final track for "On Her Majesty's Request", "Go Go Jouou Heika"（ゴーゴー女王陛下...Her Majesty au Go-Go）, also by Konishi at 53:11 in the top video for the entire album. Like the earlier "Eisei Chuukei", this is more technopop that gives a loud shoutout to Art of Noise and possibly even M.A.R.R.S of "Pump Up The Volume" fame.

As I said, "On Her Majesty's Request" is so filled with fascinating songs that I will have to do a follow-up on it next month or so since there are a couple of other special guests that I couldn't include here. The album strikes me as being a massing of Pizzicato Five's past, present and future (at the time) with all three vocalists throughout its history taking part (Sasaki's contribution isn't included here) and the musical styles that P5 dabbled in. 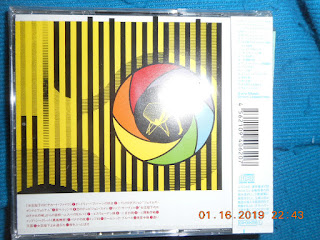 One interesting point that I got from the J-Wiki article for "On Her Majesty's Request" is perhaps the spark that got the album done in its distinctive style in the first place. Apparently, Konishi had felt for a while that the prior album "Bellissima!" (1988) was a failure since he thought that everyone had gotten a little too serious about its production and that it lacked that certain whimsy. Perhaps that feeling was the annoying grain of sand in the P5 oyster that became the pearl of "On Her Majesty's Request".
Posted by J-Canuck at 10:59 PM