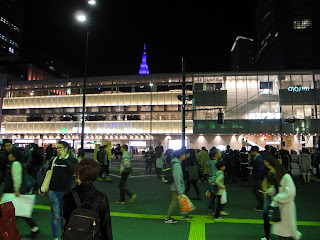 OK...before anime fans get their shorts into a knot, this Megumi Nakajima（中島めぐみ）is NOT the seiyuu Megumi Nakajima（中島愛）who came up with the scintillating "TRY UNITE!" in the 2010s. In fact, the characters for her stage name are completely different (as you can already see) and the former's time behind the mike was very brief, only releasing three singles between 1981 and 1982. Plus her real name is Kyoko Nakayama（中山京子）. The geinokai bug bit her when she saw her older sister, Harumi Nakajima（中島はるみ）, parlay a modeling career into an acting one (having appeared in the cop show "G-Men '75"), so veering from aspirations of a university major in English literature, young Kyoko decided to become tarento Megumi.


But there were those turns in the recording booth. Her debut single, in fact, was "Lamé-iro no Decameron" (The Lamé Decameron) from June 1981.

I will be honest here and say that when I first saw that katakana 「デカメロン」, and romanized it in my head, deka meron, I did think something rather naughty here and that was "big melons". Uh, first allow me to apologize, and, nope, I wasn't thinking about those super-expensive fruits sold in Kinokuniya Supermarket at 10,000 yen a shot, either. However, what is most likely the case is that the title is referring to "The Decameron". I will let the Wikipedia definition explain this:


Yu Aku（阿久悠）provided the lyrics for "Lamé-iro no Decameron" and they provide the story of a high-flying lady in a high-class life twirling men around her fingers like an expert player at cat's-cradle. Perhaps the woman herself is the embodiment of "The Decameron" in a lamé-coloured dress. Meanwhile, composer and arranger Hiroshi Ogasawara（小笠原寛）weaves a rousing disco Latin series of notes (after an ominous intro) that would be just as ideal for Meiko Nakahara（中原めいこ）. Ogasawara is actually the birth name of her person while he usually goes with his nom de guerre of Utollo Teshikai（手使海ユトロ）, a producer and a synthesizer specialist.

It looks like her debut was her only real hit as it peaked at No. 68 on Oricon and sold 22,000 records. Getting back to the name, I've categorized this Nakajima as "Megumi Nakajima (80s)" to distinguish her from the seiyuu.
Posted by J-Canuck at 8:33 PM