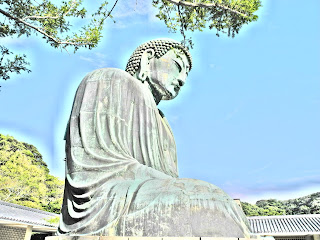 Uh...no, I realize that is the Buddha in Kamakura and has nothing to do with one of the major deities in Hinduism, but this was the closest that I could get to putting up any sort of thumbnail that has something to do with a religious icon.


Still, I wanted to kill two birds with one stone here. The first bird was the easy one since it's been a few days since I had put up a good ol' City Pop tune, and the second bird was introducing singer Yumi Murata（村田有美）to the pages of "Kayo Kyoku Plus". I've seen her around YouTube quite a lot and she has made her presence felt on Van Paugam's radio and New J-Channel on the platform as well.

Unfortunately, the same can't be said about her biography or full discography. I had to glean bits and pieces here and there, and what I could find was that she was born in Tokyo in 1957, and made her debut with the single "Mr. Romance" in 1979. Then in August 1980, she released the album "Krishna" (known in English as "The Krishna" [definite article, you might say]).

Gotta say that I love the bass and the funk here with the title track. To give fine credit where credit is due, the bass is played by Yasuo Tomikura（富倉安生）and the tight brass is provided by the MARIAH Super Horn Section, according to Amazon. I couldn't find out who wrote the lyrics or provided the melody, but Murata herself gives some sexy voice to "Krishna", purring here and soaring there. The beat is relentless. I was asked recently what would be good City Pop songs that could even play on the classic "Soul Train". Well, here may be another one.

According to her website, Murata is currently a vocal trainer.
Posted by J-Canuck at 7:42 PM