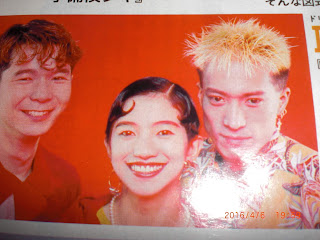 I haven't heard this Dreams Come True song in years. Yet, "Ahaha" brought back memories of vocalist Miwa Yoshida's（吉田美和）brilliant smile and fine vocal cords. I was surprised that DCT's 22nd single from January 1998 didn't hit the Top 10, only getting as high as No. 19, and in fact, J-Wiki states that it was the first time in 7 years that a DCT song failed to break through into the Oricon Top 10.

Still, this chirpy "Ahaha", written and composed by Yoshida, about a woman challenging (perhaps rhetorically) a former beau to look at her wiser current incarnation has got plenty of DCT charm especially through the singer's delivery. When I heard it again after the longest while, I simply automatically relaxed. DCT apparently gives good ASMR!

I wasn't aware that there was an English version of "Ahaha". The original version was placed onto Dream Come True's 9th studio album "Sing or Die" from November 1997. Considering the time of release, it came in at No. 52 on the 1997 yearly charts while a year later, it ranked at No. 50.
Posted by J-Canuck at 3:14 PM