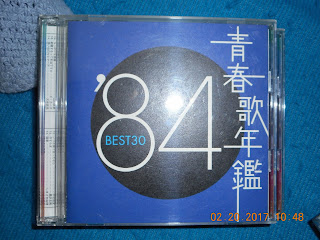 Somewhere out there, Henry Mancini may be looking at this song and nodding somewhat in appreciation.


At first thought, I was kinda like "Masatoshi Nakamura（中村雅俊）...City Pop...really?!". But then, one Gibbs slap across the back of my head later, I realized that the actor and crooner did indeed put in at least one of his songs as an urban contemporary number, "Koibito mo Nureru Machikado" (恋人も濡れる街角）, which was one of Nakamura's trademark tunes and a regularly sung karaoke song at my ol' haunt of Kuri in Yorkville in my university days (or nights, to be more accurate).

Referring back to Mancini, "Chablis no Ame" (Chablis Rain), which is a track on his July 1984 album "Monday Morning Blues", has that sleek sophistication of early 1960s stylish downtown living bringing to mind scenes from works ranging from "Breakfast at Tiffany's" and even "Mad Men". It almost requires a couple of glasses of the titular wine while listening to it. Yasushi Akimoto（秋元康）provided the lyrics for Nakamura to croon to, while Makoto Saito（斎藤誠）composed the melody of urban cool breeziness, completed with a bit of jazz here and a bit of bossa nova there.

Would be worth checking out whether the rest of "Monday Morning Blues" is in that City Pop/J-AOR vein. Plus, considering that Sunday night is out soon for us here, maybe something soothing from an album of that title may take the edge off before the commute tomorrow.
Posted by J-Canuck at 9:05 PM